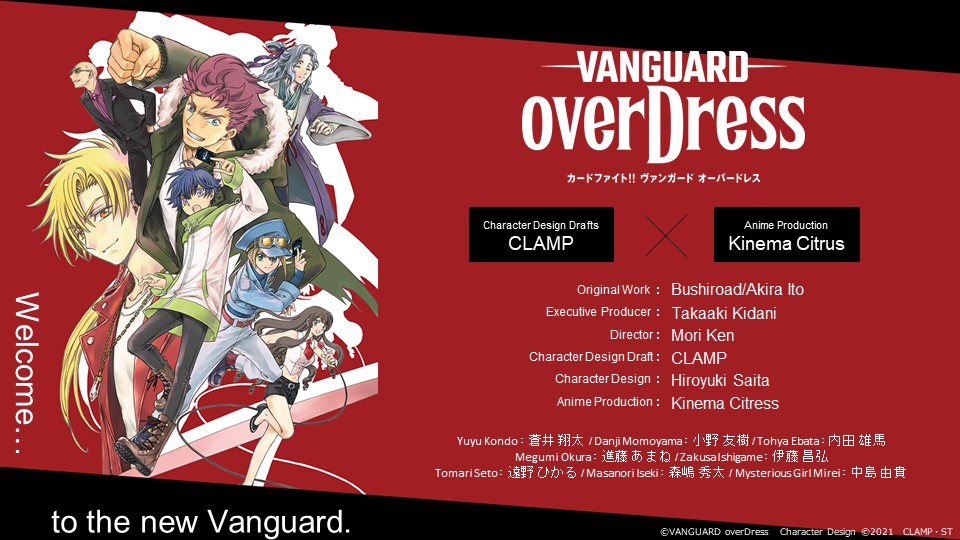 Cardfight!! Vanguard fans are in for a treat: there’s a new TV anime on the way. It’s called Vanguard overDress, and it features character designs by famous manga creators CLAMP.

The animation will be produced by Kinema Citrus.

We’ve increased the quality this time round to appeal not only to TCG fans but also to a wider audience as well!

Yu-yu is a boy living in Kanazawa, Kaga Province. He is 15 years old and in his third year of junior high school. He has the ability to sense the feeling of others, but he is troubled by the fact that he cannot say no when asked. One day, Yu-yu could no longer stand going along with his sister’s hobby, so he ran away from home. The one who saves him is Megumi Okura. Megumi invites Yu-yu to a nighttime amusement park called “Wonder Hill” where her friends hang out.

At the amusement park, Yu-yu meets Megumi, Zakusa Ishikame, and Tomari Seto, members of “Team Blackout,” a group that meets to play Vanguard every night.

Tonight, a serious fight for the team’s flag will take place. Blackout’s leader, Danji Momoyama, and the mysterious and powerful fighter, Tohya Ebata. As Yu-yu stares at them, the card fight is soon eroded into a world of images. This is how Yu-yu encounters Vanguard, a world he has never seen before, and is drawn by its powerful allure – making new friends along the way.

Vanguard overDress is set to premiere April 3. It’ll be shown on the official Cardfight!! Vanguard YouTube channel with English subs.

View all posts by Matt Schley
Blue Period, Award-Winning Manga About Art, Gets TV Anime in 2021
Don’t Toy With Me, Miss Nagatoro Anime Flirts Away in Debut Trailer