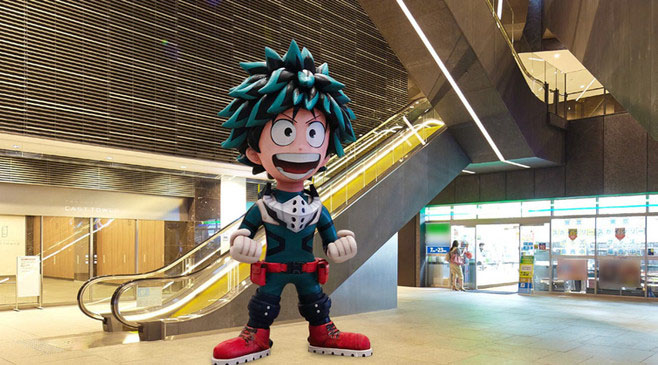 Fans of My Hero Academia may want to make a pilgrimage to Tokyo Skytree Town this weekend.

To celebrate the second season of the hit Shonen Jump-adapted anime series, a giant balloon version of main character Deku will be making an appearance at the bottom of the 3rd floor basement entrance to Tokyo Skytree Town starting April 1st.

How big a balloon are we talking here? How does twenty feet sound? No, it’s not going to replace the hole left in my heart after the loss of the giant Gundam in Odaiba, but it’ll have to do.

In addition to the giant-sized Deku, visitors will also have a chance to receive a card designating their own special superhero quirk from the series (pictured cards include Deku’s own One For All and Katsuki’s Explosion quirks), and nearby monitors will be playing the first episode of the new series.

View all posts by Matt Schley
Mobile Fighter G-Gundam Punches Its Way to Crunchyroll
Is It Wrong to Try to Pick Up Girls in a Dungeon? Box Set Packs Hestia’s Ribbon and More