My Hero Academia Author is Coming to Comic-Con 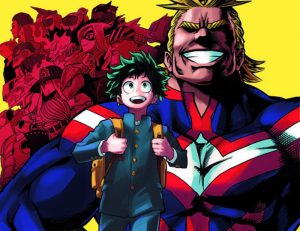 A major figure in today’s manga industry is getting ready to make his first-ever professional North American appearance. Viz Media announced plans to bring My Hero Academia creator Kohei Horikoshi to Comic-Con International 2018, which takes place from July 18 to July 22 at the San Diego Convention Center.

Kohei Horikoshi will be on hand to participate in events during the con, including the official My Hero Academia panel, which will also feature voice actors Christopher R. Sabat (All Might) and Justin Briner (Deku). He’ll be part of Viz’s Weekly Shonen Jump panel and a pair of autograph sessions, as well, with times and further information to be revealed later.

Here’s his self portrait:

Kohei Horikoshi was born in Aichi, Japan, in 1986. He received a Tezuka Award Honorable Mention in 2006, and after publishing several short stories in Akamaru Jump, his first serialized work in Weekly Shonen Jump was Oumagadoki Doubutsuen in 2010. BARRAGE and his current series, MY HERO ACADEMIA are published in English by VIZ Media.