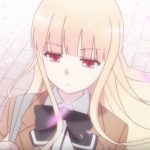 Studio Gokumi is producing an anime adaptation of Naru Narumi’s Ms. Koizumi loves ramen noodles manga, with The Asterisk War‘s Kenji Seto directing and Tatsuya Takahashi (And you thought there is never a girl online?) on series composition. The show makes its broadcast debut in Japan on January 4, and a new promo is here to introduce the characters and sample the “FEELING AROUND” theme song by Minori Suzuki.