The Morose Mononokean Anime to Return for Season 2 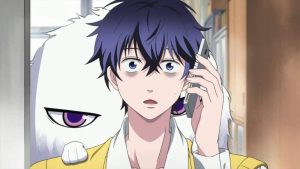 According to the official website, fans of The Morose Mononokean anime adaptation can look forward to more. A second season has been green-lit, with Itsuro Kawasaki (Magical Girl Ore) directing and Takao Yoshioka (Your Lie in April) on series composition for the Pierrot Plus production.

Yuuki Kaji and Tomoaki Maeno will be back in their respective voice roles as Hanae Ashiya and Haruitsuki Abeno.

Crunchyroll streamed the first season as it aired in 2016. Here’s how they describe it:

“Exorcism” is the art of sending yokai who have somehow wandered into the living world back into the underworld, where they belong. One day Hanae Ashiya, a high school student who’s been haunted by a yokai, happens to find the contact information of an exorcist called the “Mononokean” and pays him a visit. The exorcist he meets is a morose-looking young man, Haruitsuki Abeno, and for various reasons Ashiya ends up working for the Mononokean… And so the story of the exorcist duo Ashiya and Abeno, and the yokai they meet in their adventures, begins.