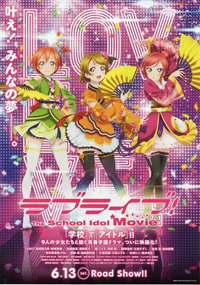 Love Live! The School Idol Movie is hitting theaters across the globe, and voice actress Emi Nitta, who plays the series’ Honoka Kosaka, is here to promote the release in an English-subtitled video.

The film will hit theaters in the U.S. September 12 (a list of theaters can be found here).

In the video, which is aimed at Singaporean audiences, Nitta expresses her happiness that the film will be seen in theaters overseas.

“We hope that we can bring a smile to everyone’s faces,” says Nitta in the video, which runs about one minute.

Love Live! The School Idol Movie, which opened in Japan in June, earned over ¥2.4 billion. Aside from the U.S. and Singapore, it’s also being released in several countries including Australia, New Zealand, Korea and more.