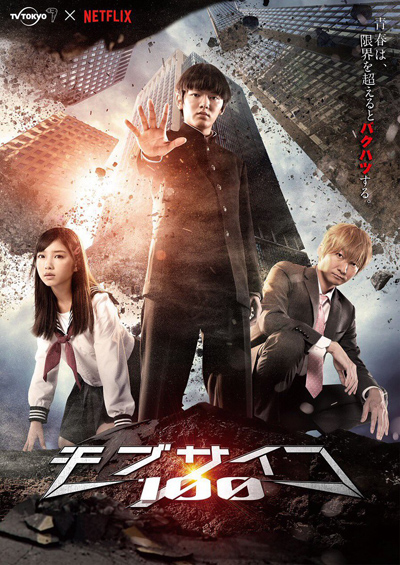 Get ready for some live-action Mob Psycho 100 action.

The live-action series, based on the manga by ONE, is headed to Netflix in the U.S. May 22.

The series has been running on Japanese TV since January of this year.

Like the manga and anime, the live-action Mob Psycho 100 tells the tale of Shigeo Kageyama, aka Mob, an eighth-grader with psychic powers.

Dark Horse, who recently announced they would be publishing the Mob Psycho 100 manga in English, describe it like this:

It’s not easy being an exorcist, but when you’re a first-rate fraud like Reigen, ghostbusting is a lucrative business. Especially when you have an underpaid teen psychic to do your dirty work! Enter Shigeo, aka “Mob”—Reigen’s student assistant whose powers keep them in business. Powers Shigeo keeps a tight lock on, because when this kid’s repressed emotions reach level 100, it can unleash more psychic energy than either of them can handle!