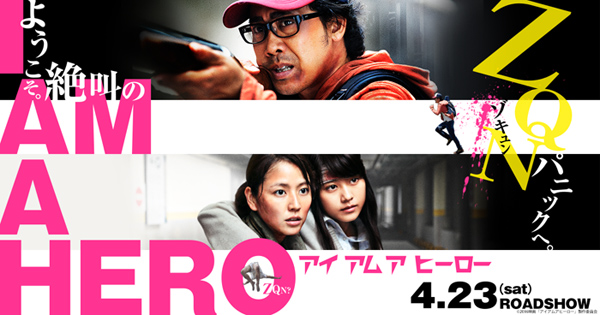 So often, even when I write film reviews (even positive ones), it’s with qualifiers. Even if I don’t flat out say it, it’s at least implied, crouching there in the text like the proverbial elephant in the room. Yes, this movie is good – for a manga adaptation. Yeah, this one was interesting – for a recent Japanese film.

So I’m thrilled to say that live-action manga adaptation I Am a Hero, out this week in Japanese theaters, is – without any qualifiers – simply a darn fine flick.

I Am a Hero is adapted from Kengo Hanazawa’s popular manga of the same name that began serialization in 2009 and is ongoing. It’s directed by Shinsuke Sato (Gantz, Library Wars) and stars Yo Oizumi (Professor Layton) as Hideo Suzuki, a down-on-his luck manga assistant whose lack of success, says his girlfriend, comes from being “too normal.”

Normal Hideo may be, but the world around him takes a decidedly abnormal turn as an infection called ZQN, which gives people a shuffling gait, pale skin and a thirst for guts – in other words, your garden-variety zombie apocalypse. 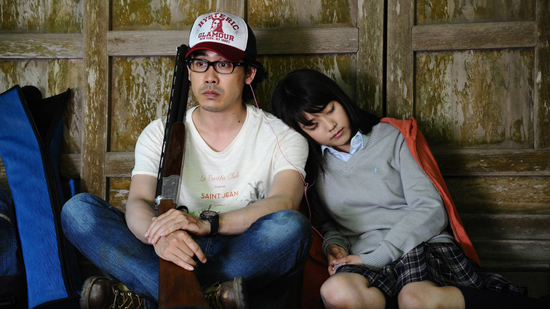 Through a series of haphazard coincidences (in one of the film’s many fine action sequences), Hideo finds himself unZQNified and paired up with high-schooler Hiromi, and together they set off toward Mt. Fuji, the high elevation of which is rumored to kill the ZQN virus.

It’s a wide range of qualities that elevates I Am a Hero above its manga adaptation brethren, but one is definitely the performances. Oizumi’s turn as the underachieving, somewhat disturbed Hideo is especially effective, but so is supporter Kasumi Arimura, seen a mere month ago giving a sappy, melodramatic performance in the abysmal ERASED – a tribute to director Sato and proof that acting is, like most things in filmmaking, a collaborative effort.

I Am a Hero also nails the tone, both giving plenty of thrills and chills (the film received an R15+ rating in Japan, and for good reason – there are blood and guts everywhere) while delivering a few laugh-out-loud-funny moments. On an of the Dead scale, I Am a Hero skews closer to Dawn than Shaun, but also knows where to find laughs. 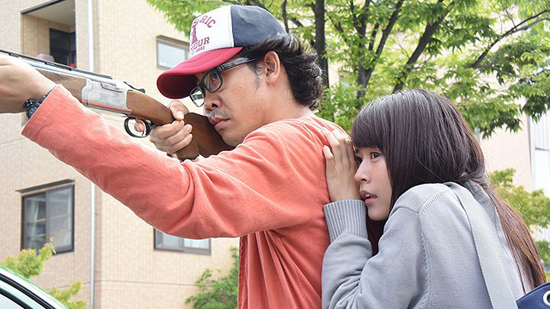 But what ultimately sets I Am a Hero apart are its production values. With so many recent Japanese films feeling and sounding like glorified TV specials, I Am a Hero is a movie.

One reason I Am a Hero doesn’t feel like a 2016 Japanese movie is perhaps because it isn’t – not entirely, at least. Large portions of the film were shot in South Korea and staffed by a Korean crew (and even some actors). Korea’s cinematic output has certainly faired better on the world stage in recent year’s than Japan’s, and films like Oldboy prove Korean crews are up for a bit of splatter. In any case, if I Am a Hero marks the beginning of an era of cooperative Japan-Korea filmmaking, count me in.

I Am a Hero isn’t a perfect film – the ending feels unsatisfying (perhaps because the original manga is still ongoing) and it doesn’t really add any new concepts to the zombie movie universe (the concept probably felt a bit fresher when the manga started in 2009, before the zombie boom). But for two hours, I Am a Hero made me forget I was watching a manga adaptation and let me just – without qualifications – enjoy the ride.

Matt Schley is Otaku USA’s man in Japan and e-News editor. Ask him about I Am a Hero (or any ol’ thang) at Anime Fan Fest.