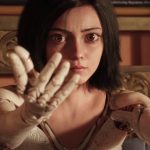 If you were wondering when Hollywood would finally depict manga/anime eyes as they were meant to be, well, look no further than the first trailer for Robert Rodriguez’s live-action adaptation of Yukito Kishiro’s Battle Angel Alita manga.

The James Cameron-produced project has been in flux since before many of our readers were born, but now that it’s actually coming out we can get an idea of what they’re going for in Alita: Battle Angel.