If the name Masaaki Yuasa doesn’t ring a bell with a lot of anime fans, it’s not for lack of talent. The 47-year old director has marked himself over the last decade as one of the most bold and unique auteurs in Japanese animation, delivering mind-bending stories and characters in works like Cat Soup, Mind Game and Kaiba. But despite his penchant for breaking the anime mold – or, probably, because of it – the bulk of Yuasa’s work has yet to be released Stateside.

But more fans in the west are catching on to Yuasa’s unique brand of animation, thanks to the release of his latest series, Kemonozume , and especially the in-progress, crowd-funded short Kick-Heart, which was met with an outpouring of enthusiasm (and cash) from fans hungry for something new.

Yuasa is aided in his quest to deliver Kick-Heart by Eunyoung Choi, an incredibly talented key animator who’s been working with Yuasa since his 2006 series Kemonozume . We got the chance to ask them some questions at the just-finished Anime Los Angeles and follow up on our earlier interview.

Yuasa-san, you’ve worked at a lot of different studios… what is it like working at Production IG?

Yuasa: The first time I worked with Production IG was about 10 years ago on a couple of short films. I’ve done a lot of work with small studios before that had a very homey feel. Working with IG is more official. IG is a very business-oriented company, and that’s probably one of the biggest reasons why they’re still active despite the bad economy, so I really respect that. They’re also known for really high-quality animation, such as A Letter to Momo and Mamoru Oshii’s movies and so on.

When you’re choosing key animators to work on your projects, what kind of people do you look for?

Yuasa: People I like and who listen to me.

Choi: What kind of answer is that?! (everyone laughs)

Yuasa: You know, someone who can create what I’m looking for. 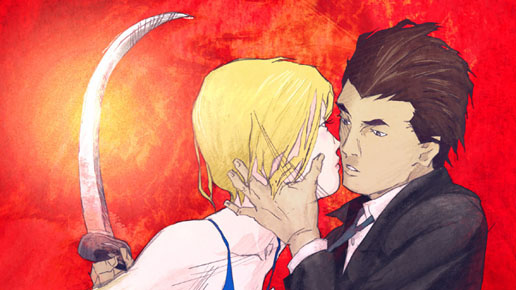 Since Kick-Heart has gotten a lot of support from international backers, were you thinking about the international market while developing the story?

Yuasa: I had the western audience in mind when I was drawing the pictures and designing the characters and whatnot, but as we started interacting with the backers, I started to notice more and more that the difference in style between what western fans like and what Japanese fans like are really not that much different.

You have a very small team working on the project. What are the advantages or disadvantages of such a small group?

Yuasa: The advantage is I don’t have to do so much explaining. But that bad part is that everyone has to do such hard work.

Choi: I actually went to London to study animation. I was planning to stay in London and do animation there, but I had a friend named Jamie Vickers, an animator in Japan, who told me how amazing Japanese animation was. I didn’t really believe him at first, because I didn’t know anything about anime, but he sent me a lot of examples and clips from creators like Yuasa-san and [Koji] Morimoto-san. So I thought, “okay, I want to try!” I already spoke Japanese, because I lived in Japan before moving to England.

I went to Japan, but it was kind of difficult to find work because I was trained on key animation, not in-between animation and clean-up, where most Japanese animators start out. In London, they train you directly on key animation or direction because there is no in-between work in London.

Jamie Vickers told me that Yuasa was starting a new work at Madhouse (Kemonozume ), so I just brought them my portfolio. In the beginning, they were kind of like, “we’re cool, so you have to be cool…” you know? (laughs) They said I could do a few cuts of animation, but I really wanted to be on the team. So they asked me to prove what I could do. I drew some Kemonozume style drawings and worked like crazy to improve them. But it was fun, you know? That’s how I started.

Are there any special challenges for women working in the industry?

Choi: Yeah, totally. In most anime, I don’t really agree with the way females are portrayed by the director. Or maybe it’s not the director’s fault, it’s just that females are portrayed that way to make money. I’d like the industry to say something different, but they keep doing the same thing over and over. They think it’s the only way to make anime, but I don’t think so.

I think the industry is losing market share. It’s shrinking. We have to find something else and think about a different audience, not only single males. That’s what I believe. That’s why I like working with Yuasa-san: he has a different point of view. Of course, sometimes I give him comments: “I don’t think a woman would think like that…” 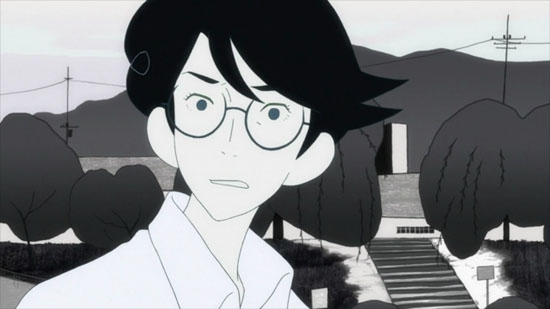 Do you have any ambitions to direct yourself?

Yuasa: I think she wants to.

Any final words for Otaku USA readers or your Kickstarter backers?

Choi: I was very surprised after we closed the funding, because when we looked at where the money had come from, it had mainly come from the United States. I was surprised because the world of animation in America is completely different from Japanese animation, so I thought we’d have less backers here. It gave me hope for bright future for us in America. Thank you so much to everyone on Kickstarter.

Yuasa: Sincere thanks to all the backers. They were very encouraging and motivated me to continue working on Kick-Heart . I want as many fans as possible to watch the final show.

Special thanks to Maki Terashima-Furuta from Production IG USA for interpretation.