It’s an ERASED kind of month.

The popular manga-turned-anime known in Japanese as Boku dake ga inai Machi is having a busy March. The manga, which started its run in 2012, came to a close this month, as did the spinoff novel series. The anime is set to air its final episode March 25, and the live-action film adaptation is opening this weekend.

The media machine is in full swing to promote the film, which stars Tatsuya Fujiwara (Death Note, Kaiji). Yesterday saw the release of a series of new posters for the film, which show Fujiwara as main character Satoru Fujinuma, Kasumi Arimura (When Marnie Was There) as Airi Katagiri, Yuriko Ishida (Princess Mononoke) as Sachiko Fujinuma and Tsubasa Nakagawa and Rio Suzuki as the child versions of Satoru and Kayo Hinazuki, respectively.

The film is directed by Yūichirō Hirakawa (Rookies).

Otaku USA’s Japan-based writer (that is, me) is kind of miffed the live-action version is coming out a week before the anime ends, but will swallow the spoilers and dutifully file a review of the film next week. Don’t say I never did nothin’ for ya! 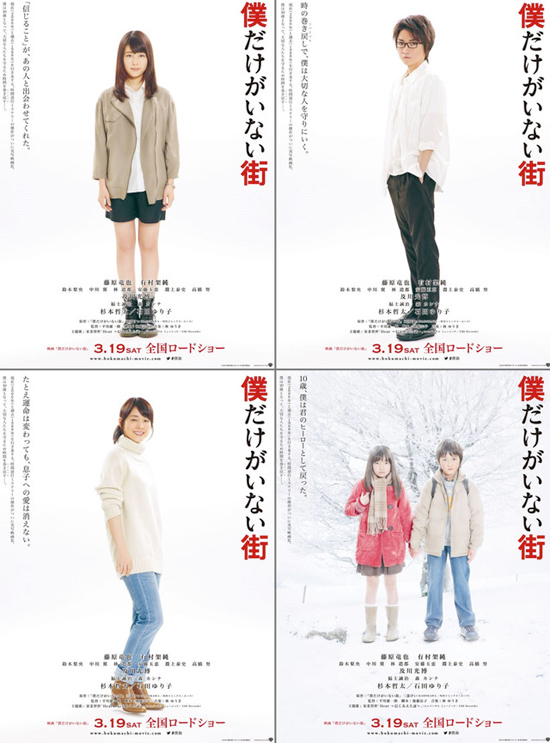