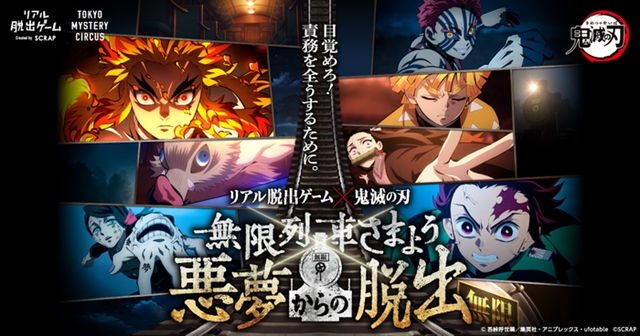 Called “Mugen Ressha: Samayou Akumu kara no Dasshutsu” (translated as “Mugen Train: The Escape from The Wandering Nightmare”), you and a group of up to six people will be on the Mugen train. You’re part of the The Demon Slayer Corps, but Enmu’s Blood Demon Art causes you to drift off into sleep. Once you’re done sleeping, you find yourself with protagonist Tanjiro and the Flame Hashira Kyojuro Rengoku, and you’ll work with them to fight demons and get off the train alive.

Part of the escape game consists of solving riddles, but it won’t all be cerebral. You’ll also be given a Nichirin Sword to fight the demons. So if you’ve ever wanted an opportunity to feel as if you were really in Demon Slayer, here’s your chance. A trailer for the event has been put online:

The whole game will take two hours. It’s located at the TOKYO MYSTERY CIRCUS Himitsukichi Lab Main Hall in Tokyo. The game launches on October 27 and will stick around until January 24 of next year.

The Demon Slayer franchise has been a massive success in Japan and abroad. VIZ Media publishes the manga in English, and gave this description of the first volume:

In Japan, You Can Hire a Handsome Butler to Go Clothes Shopping With You
Lycoris Recoil Anime Fires Away with New Promo and Visual