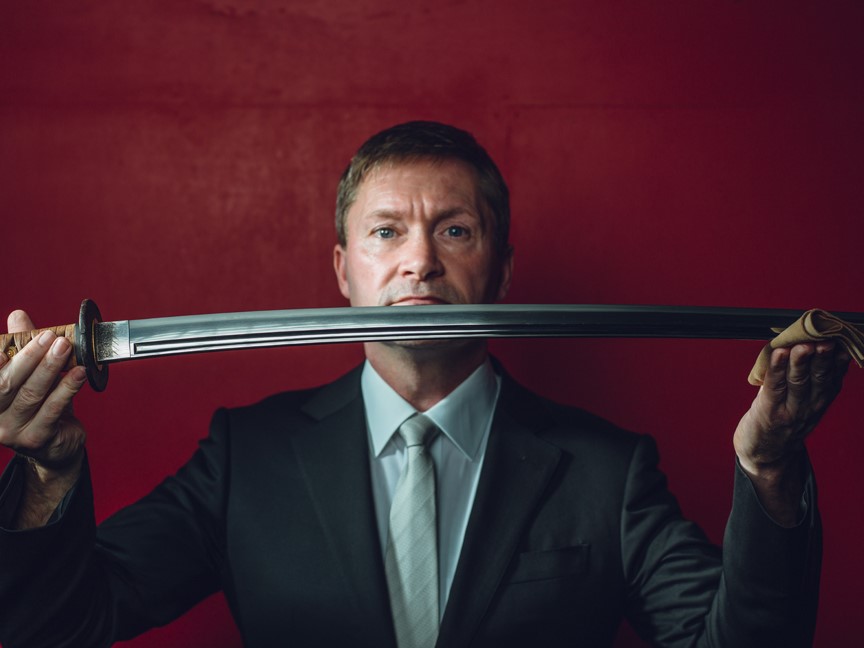 The tsuba [hand guard] is currently on display at the the Aizu Wakamatsu old samurai academy, and Martin has plans for the rest of the mountings as well. Otaku USA talked to him about the meaning of the Japanese sword, the attraction of Demon Slayer, and where people can learn more. 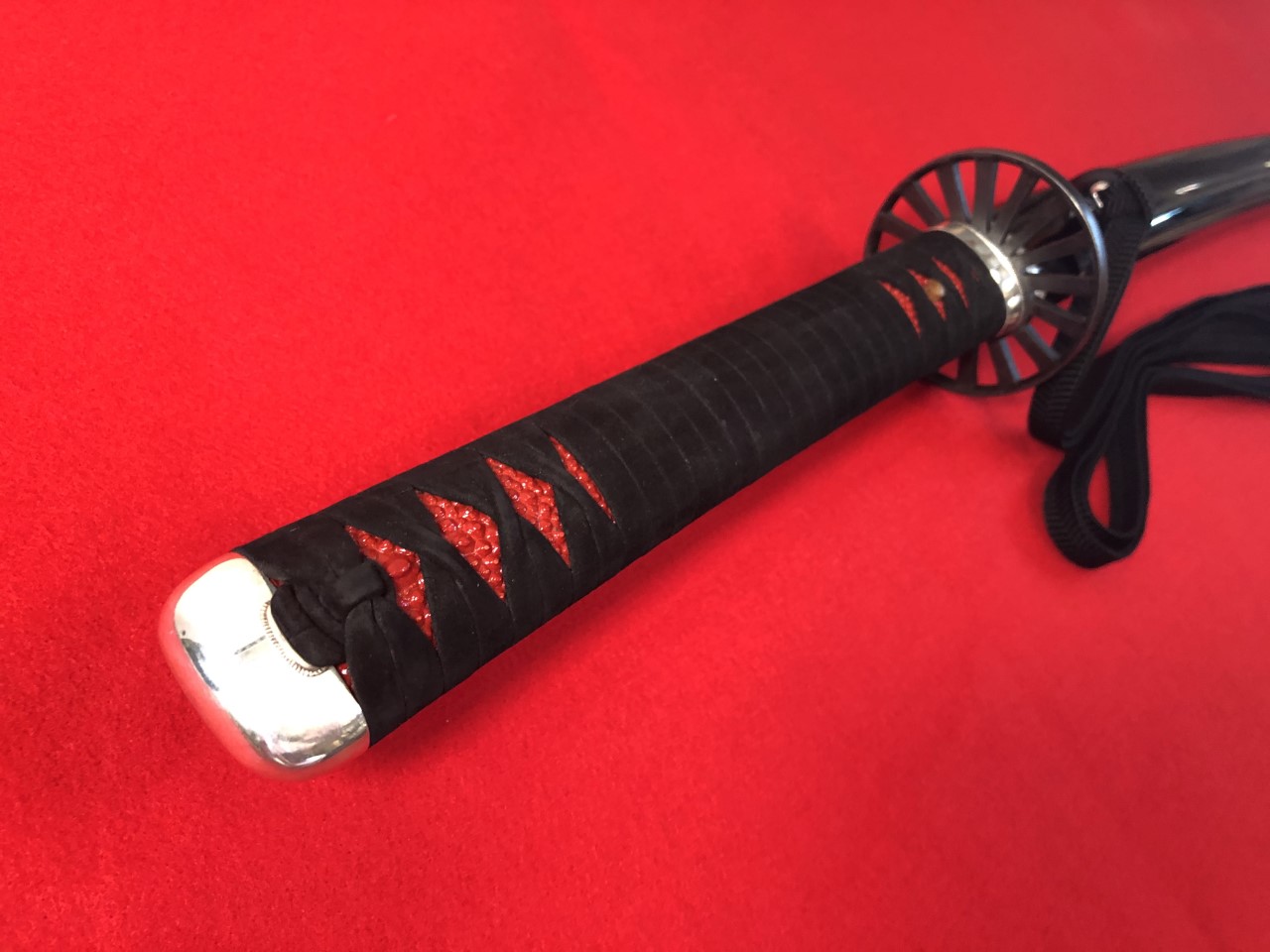 How did you first get interested in Japanese swords?

My father practiced karate, and I started at the age of seven, so I grew up doing karate. That led to me watching Kurosawa movies and a movie called The Yakuza, with Takakura Ken and Robert Mitchum.

There was that samurai connection with the Kurosawa movies, and he uses a sword in The Yakuza. The Yakuza movie is surprisingly deep at some parts. Leonard Schrader, who wrote the original book, lived in Japan for a long time, was married to a Japanese person, and he had great understanding of Japanese culture.

How do you promote Japanese swords?

I translate books and exhibitions and I’ve made documentary DVDs. I was executive producer of a documentary called, Forgive, Don’t Forget. The director had swords in his family from after the war that his grandfather brought back. He decided he wanted to return one of his swords, so we documented the whole process.

It revealed what the Japanese sword means to Japanese people. It wasn’t just a mere weapon; it had deep spiritual meaning. The original owner survived the war but he passed away [by the time the documentary happened]. When his sister was given the sword back, she said, “His soul has finally come home.”

I made another documentary called The Art of the Japanese Sword, where we interviewed lots of different sword makers and craftsmen and showed the different processes of making a sword.

I have also started doing Japanese tourism work. I was appointed as a specialist by the Japanese Ministry of Land, Infrastructure and Transport. I advise them on how to promote sword culture and samurai culture to the world.

What would you tell people who don’t know much about Japanese swords to convey what makes them so special?

It was a journey for me, too. I grew up in a different country, and I thought they were just very cool weapons. But they’re not merely weapons. They are very beautiful art objects, and have been as long as the sword has been around. There are Kamakura period [1192 to 1333] scrolls of a man admiring the beauty of the sword. Therefore, because he could see the beauty of the steel, this is proof it was an art object as least as far back as the Kamakura period. This is the earliest evidence we have; the practice probably goes back even further.

Swords were never the primary weapon. Before swords would be used, there were bows and arrows, and yari (spears with a long shaft). In the second World War they mass-produced many swords, but this was more for propaganda reasons, to try to cultivate samurai spirit and get the public to do what the military government wanted them to do.

Why did you want to make the Demon Slayer mountings?

I don’t normally watch anime or read manga, but I got caught up in Demon Slayer. The representation of the sword in the series has the spiritual aspects that reflect the ways in which many Japanese people feel about swords.

I think the three main characters are complex. You have Tanjiro, who wants to be benevolent and kind, but many of us are like a bull in a china shop like Inosuke. And like Zenitsu many of us spend our time worrying about things, but when it actually comes to it, we have that fight in us. I think the clearly divided personalities of those three characters are a combination of the characteristics in every single person, which is why I think they appeal to many of us.

In Japanese swordsmanship, there is a Buddhist type conundrum, The Life-Giving Sword and the Death-Dealing Sword (Katsujinken-Satsujinto). Obviously, these are both the same sword, but it is up to the user on how he uses it. Tanjiro’s sword is very much a Katsujinken. Nowadays, there are no sword wielding warriors per se, but in Japan and gradually spreading around the world are Japanese sword martial arts. They are no longer used for military purposes, but the practice of the lethal techniques is regarded as a way to improve one’s own spiritual potential as a human being. So, in a way, by practicing these arts we are slaying our own demons.

What are you doing with the mountings?

Depending on which scene you look at in the anime or manga, the mountings slightly change. I chose one tsuba [hand guard] that had six spokes, and then I thought, “Nah, I want one with more spokes, like they have in the movie poster.”

The first sword guard that I made is now in Nisshinkan, the old Aizu clan Samurai Academy, in Fukushima prefecture. I feel very honored that my sword guard is on display in a real samurai academy.

The Nisshinkan Military Academy was widely known throughout Japan for its academic excellence. It was established in 1803, for the children of high-ranking samurai in the Aizu clan. In the late Edo period, the Aizu clan from Mutsu province (Fukushima Prefecture) was under the command of ninth-generation lord Matsudaira Katamori, who was a cousin to the Shogun Yoshinobu Tokugawa. This meant that the Aizu clan were the most trusted allies and confidantes of the shogun.

I think it is wonderful that by displaying my Tanjiro sword guard, Nisshinkan is acknowledging that the future generations of caretakers of Japanese culture, historians, sword enthusiasts, martial artists, and curators may be among the current generation of manga and anime fans. This a trend that we have been seeing over the past decade with lots of sword-based anime, manga and online games (Samurai Champloo, Rurouni Kenshin, Touken Ranbu, Gintama, Demon Slayer, etc).

Furthermore, Emperor Gotoba has also recently been the subject of sword manga in Japan. As I’m trying to raise awareness for our Emperor Gotoba 800 project, the complete set of Tanjiro’s Nichirin-to mountings are going to be sent to Oki-no-Shima (Oki Islands, Shimane prefecture), where Emperor Gotoba’s grave is and put it on display at the Gotoba Museum.

What is the Gotoba 800 project?

Emperor Gotoba was active in the 12th and 13th centuries. In the run up to the Jokyo Rebellion of 1221, he invited the best swordsmiths in the land to the imperial palace, and is said to have taken part in sword-making himself. About twelve of these blades still exist. There’s no absolute proof he made them, but it’s become part of the sword legend. Swords said to have been made by him have a hairline engraving of a chrysanthemum in the base of the blade, under what’s called the habaki (a retaining collar).

Unfortunately, he lost the rebellion and was exiled to the Oki-Islands for the rest of his life. 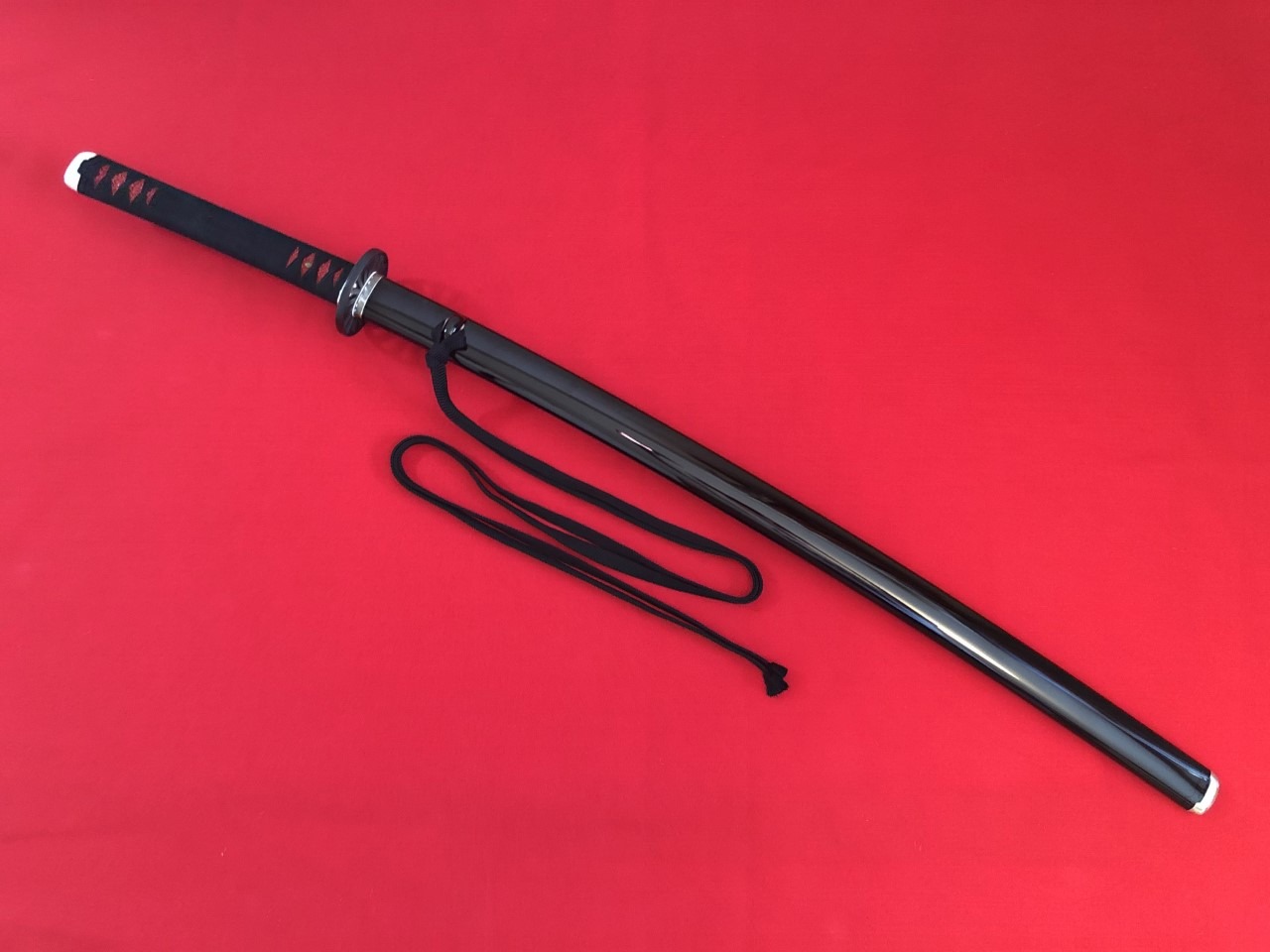 However, he was allowed to continue his sword making there. This year marks the 800th year since his exile to the island. It is such a fantastic place that I’ve been to the island five times. I don’t usually say this, but his grave was a real power-spot. I get goosebumps every time I visit there.

As part of the events celebrating the 800th anniversary, I’m trying to raise money to have ten to twelve swords made so we can donate them to his shrine. His original band of swordsmiths at the palace and on the island were called the Gobankaji. In the Showa period [1926- 1989] a group of swordsmiths was recreated and called the Showa Gobankaji. I would like to continue that tradition by creating a Gobankaji for every future generation of swordsmiths, and recording their workmanship by having the swords donated to the shrine.

Where can people learn more about you and Japanese swords?

I have my webpage and my YouTube page. I have a documentary on Emperor Gotoba uploaded, and I’m currently making one about Kondo Isami of the Shinsengumi. I am planning on making a whole series of samurai short stories.