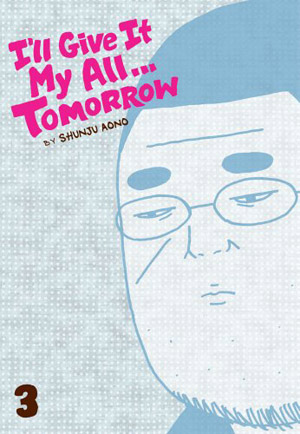 Now 42-years-old, Shizuo has quit his regular job, taken up a gig at a burger place where his boss is 25, and is trying desperately to become a professional mangaka. Time and again he bemoans how many years he’s let slip by, and how hard it is to get published. At the same time, he tries to keep a good attitude in general.

It’s too bad his father is so cranky about it all. The father confronts Shizuo throughout the book, expressing his disappointment and pressuring Shizuo to quit his dreams.

After taking a verbal battering from his father at the beginning of the manga, Shizuo slips into a glorified fantasy of his life in five years. In it he’s a famous mangaka whose work is being made into Hollywood movies, his daughter has given birth to a child, and his father—finally!—respects him.

After this fantasy, Shizuo has a talk with God. God shows up, looking quite a bit like Shizuo himself, only less messy and wearing a shirt that says “GOD” on it. While speaking with God, Shizuos at other ages show up. Here’s 32-year-old Shizuo in his tie, and a 22-year-old Shizuo wailing out his sadness on a guitar. Here’s 15-year-old Shizuo devastated to see what his future will be like.

Once all of this is over, our mangaka wannabe has a new way of looking at things. He decides that it’s really a loss of luck that has held him back, and he chooses to use a pseudonym in case that can turn things around. He wins an award and an honorable mention for his latest piece, but that’s still not getting published, and his father is still wildly disappointed in him.

This was a very strong volume in the series. It’s less depressing than the last volume, despite the continuation of Shizuo’s failure. This volume is ultimately more clever and offbeat, which I appreciate, like Shizuo’s discussion with God and his other selves.  You don’t see that in manga every day. It’s also a very cathartic read to anyone who feels they’re struggling in life, especially starving artists. The title sounds like such procrastination, but the reality is much more sincere. Shizuo tries really hard to accomplish his dreams, but whether from a lack of talent, luck, or a combination of these and any other circumstances, he continues to have difficulties