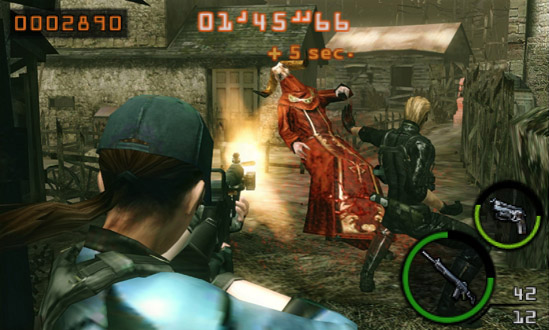 Resident Evil: The Mercenaries 3D, the game where you can’t erase your save data, where you are doomed for all eternity to stare at the high scores of whoever pwnt your copy first—yes, it’s true, but Capcom has already heard everyone loud and clear on this point and stated they don’t expect to be leaving out this feature in future titles, so save your rage for sowing carnage in this bonus round playground.

The concept of The Mercenaries is probably already familiar to fans of the Resident Evil series, since the time-based kill-a-thons appear as post-clear diversions going back as far as Resident Evil 3 (or even arguably 2). Actually, Mercenaries 3D is just a compilation of 30 missions taking place in remastered (and looking good in 2- or 3D) stages from 4 and 5, so if you already put in your time on those games, you may find the settings and maps a bit stale.

That said, the lure of these short bursts of intense head-popping violence is pretty strong and you can do a lot of play-style tweaking by learning all 8 characters, including Chris Redfield, HUNK, and my favorite for her speed, Jill Valentine. Managing your smashing of time bonuses scattered throughout a map vs. how long you think you can make your health last is a decent challenge. There is nothing quite like the rage of being insta-killed by a chain saw to the back, but you can mitigate it somewhat by employing ammo-saving melee attacks to stunned enemies. Balance in all things. 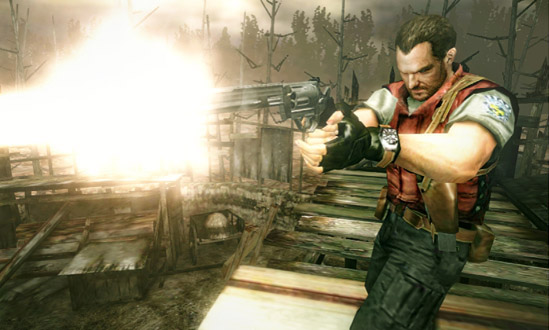 The control scheme is pretty comfy, keeping in mind that my hands are not too huge. Aiming with the control stick while holding down R and shooting with Y feels as natural as anything, and far closer to the 360 or PS3 counterpart than similar control styles I’ve experienced mapped to a PSP. Your inventory screen is always on the bottom and you can touch any item to equip or use, which is so handy and visceral (Punch that herb! Punch it now!) that I didn’t even realize there were button controls until reading through the manual later.

As you unlock more Missions and characters (and outfits, and weapon sets) by clearing Missions with a B grade or higher, you also unlock and level up skill bonuses ranging from various weapon masteries to luck (which will help with those insta-kill issues you’ve been having) or improved stomping ability. The higher your score, the more skill points you receive when you clear, which means the best way to level up is definitely Duo mode. 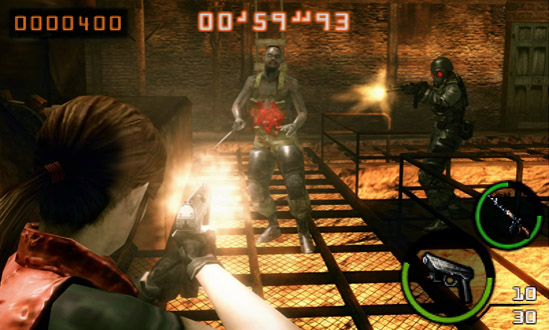 Co-op is 100% the most fun part of RE: The Mercenaries 3D. Even if you’re just playing online with strangers, and not locally with a 3DS-toting pal you can shout across the room at, the rush from the insane combos you can rack up as two people makes the single player mode kind of depressing in comparison. And why suffer hammering the Y button to recover enough from a death blow to be able to run away and herb yourself when your counterpart can swoop in with a rescue? Sure, that takes some coordination, but nobody is going to save you when you’re all alone. The occasional dropped game (whether due to network issues or player lameness, who knows?) was not annoying enough to dampen my stat grinding enthusiasm or combo high.

Overall, it’s true that full price is a kind of a lot for a built out mini-game, but the replay value is as plain as the zany grimace you’re shooting off a cultist’s face. It’s almost kind of nice on a handheld to have something that is not story driven, where you can just rough up some baddies for a few minutes here or there, but if you’re more into plot, just hold out for Resident Evil: Revelations, coming to 3DS next year.