I Think Our Son Is Gay Is a Laid-Back, Endearing Family Manga 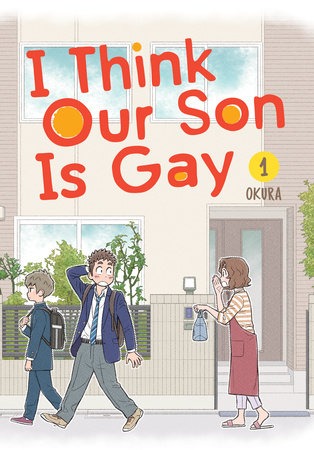 I Think Our Son Is Gay is a manga that first appeared on social media, and it grew enough of a fanbase that it received publication as a book series. The main character, Tomoko, is a 40-year-old wife and mother who has two sons, both of whom she adores. But the book concentrates more on the elder son, Hiroki, who is in tenth grade for most of the story, and whom Tomoko thinks is gay.

Over the years Hiroki has dropped plenty of indicators, including the pretty obvious fact he repeatedly refers to getting a boyfriend, and then blushes bright red and insists he meant “girlfriend.” One of the most common sights in the manga is Hiroki blushing because he just gave something away and tries to cover for it. Tomoko gets it, the younger son seems to get it, but the father still seems pretty oblivious. The father makes comments like how it’s gross to see men kiss, and Hiroki visibly sweats when he hears these this.

Throughout the manga it’s clear that Tomoko loves and supports her son, and she frequently makes references to us, the reader, that she thinks he’s probably gay. However, she never tells him that she thinks this, or that she’ll support him no matter what. It can feel contradictory that she’s supportive and yet doesn’t say anything, though maybe the point is to let him come to understand himself on his own and not feel pushed by her.

I Think Our Son Is Gay is written with short chapters. It doesn’t really have a plot; it’s one of those laid-back manga that shares itself through vignettes. Sometimes the chapters will jump back in time and reveal more of who Hiroki was when he was little, like him kissing another boy in preschool or him in eighth grade freaking out that his mom saw what he was looking up online. The style gives it a calming, sweet effect, which is what makes it endearing and explains why a manga published on social media got so much attention. The first volume is only 128 pages, making it an extra quick read.

i think our son is gay 1