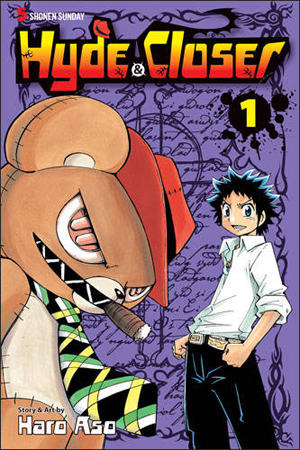 Lots of boys have teddy bears. But Shunpei Closer’s teddy bear smokes cigars and wields a chainsaw.  And he’s not very cuddly.

Shunpei used to be close to his grandfather, whom he believed was an archeologist. Well, it turns out that his grandfather was actually, er, a sorcerer. In fact, an incredibly powerful sorcerer. He’s been missing for six years, and other sorcerers from around the world want to tap his powers. It’s said that his powers can still be obtained by eating the beating heart of his closest direct descendant. In other words, Shunpei’s.

When a cursed stuffed monkey attacks Shunpei and informs him of all this, rescue comes from a most unusual place. The teddy bear named Hyde, who was given to Shunpei by his grandfather, comes alive to protect the boy from having his heart eaten. Toys don’t normally do this, but apparently his grandfather charmed Hyde and gave him to Shunpei for this very special reason.

The stuffed monkey is defeated, but Shunpei and Hyde are kidding themselves if they think they’re out of danger. Other sorcerers want Shunpei’s heart and they keep coming after him. Hyde’s quite a fighter, but it’s also important Shunpei learns sorcery so he can protect himself on this own.

Hyde & Closer was more enjoyable than I thought it would be. The cover art didn’t attract me, and cover art can make a difference in people’s choice of reading material. The concept—a cursed toy with a chainsaw—also sounded a little too much like the plot of a bad horror movie. As it turns out, though, Hyde & Closer is tightly written and clever. It makes the suspension of disbelief work so you can get into the book without scratching your head about how absurd it really is.

It has funny moments and it moves along smoothly, not getting too wrapped up in lengthy fighting scenes. Shunpei is a likable character, introduced to us as a kindhearted loser with which we instantly sympathize. He doesn’t do well in school and tries to cut corners, only to soon learn he can’t get away with slacking off when it comes to sorcery. While each little storyline works just fine, I thought the last one was the most intriguing, with a man trying to bring his doll to life so he can marry her. It was strange enough to catch my attention and be unique. So far Hyde & Closer is off to an interesting and fun start.