Higurashi When They Cry: Beyond Midnight Arc 1 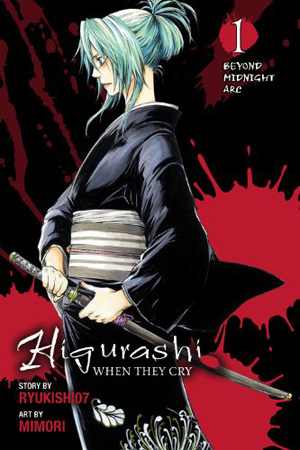 Some journalists are content sitting behind their computers and working. Not Arakawa. After writing about Hinamizawa—a supposedly cursed Japanese village where the people were all killed one night—he decides to visit the ghost town himself. He’s warned not to, but all he can do is joke about it. If he doesn’t return, he says, people can assume he’s been “demoned away.”

And he’s not the only one who’s visiting the village. Akira is driving with some friends to check out Hinamizawa, but they’re caught in a torrential downpour and Akira gets out of the car when nature calls. Unfortunately for him, the car disappears without a trace and then he loses his umbrella. He finds a woman—or is it a ghost?—who has an umbrella and carries a wrapped katana. Her name is Mion and he hopes he can trust her. Who knows? The two of them wander farther into the forest.

They find shelter and there they meet a boyfriend and girlfriend also visiting Hinamizawa. Before too long, the journalist is also there. That means there are five people touring the haunted place. But before the night is over, not all five of them will still be alive . . .

Sometimes the Higurashi books are gory, and sometimes it depends more on the power of suggestion. In the Beyond Midnight Arc, it’s mainly the power of suggestion going into play, and it works very well. Something about Mion can be especially creepy. Likewise, talk of being demoned away has a certain sinister quality to it. There’s a big difference between being spirited away and being demoned away. It’s said that Hinamizawa’s swamp reaches down to hell and that’s where all the evil comes from. Characters try to find logic in what’s going on, though again and again it seems the supernatural is at hand. That makes it all the spookier, because how can they fight powers they don’t even understand?

Higurashi has been going through a few arcs now, and so far the Beyond Midnight Arc is a strong one. It has a deliciously creepy atmosphere to it that builds as the story comes together. It never goes overboard with the horror by trying too hard to scare people. Instead, it lets the idea of Hinamizawa sink into the reader’s mind. It also feels apropos that this latest volume in the horror series is being released just in time for Halloween. But what’s really scary is that after reading the cliffhanger of an ending, you’re going to have to wait two months before you know what happens next.