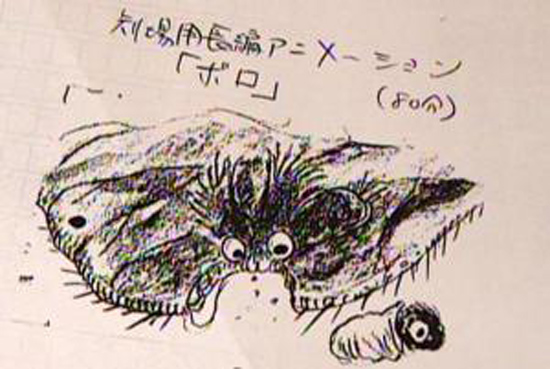 When Hayao Miyazaki retired in 2013, he mentioned that while he was done with feature filmmaking, he still had plenty of projects up his sleeve, including potential animated shorts for the Ghibli Museum in Mitaka, Tokyo.

Miyazaki is making good on that promise, and now we have some more details on his CG short originally announced back in July.

Miyazaki will be teaming up with CG animator Yuhei Sakuragi to learn the ropes of computer animation to create a short about Boro, a hairy caterpillar he first designed back in the 90s.

Sakuragi was the CG director for the film The Case of Hana and Alice and created the Animator Expo short “Neon Genesis Impacts.”

As always, we’re looking forward to whatever Miyazaki cooks up.

– A Brief Look at the Manga of Hayao Miyazaki
– Studio Ghibli’s Isao Takahata Goes Deep in New Interview
– Miyazaki is Working on a CG Short
– Studio Ghibli Classic Only Yesterday to be Released in U.S.
– 8-Bit Cinema Tackles Princess Mononoke