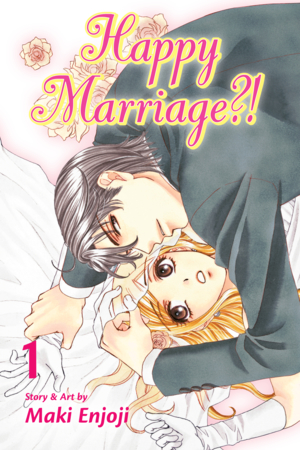 Chiwa Takanashi is in an awkward situation. She’s balancing two jobs to try to pay off her father’s debts, but all her money problems can be swept away if she agrees to marry a man she just met.

One of Chiwa’s jobs is at an office, and the chairman of the company was able to start his business because Chiwa’s grandmother helped him. This was back when Chiwa’s family had money, before her father royally messed up the finances. The chairman is more than willing to handle the debts if Chiwa would marry his grandson, Hokuto, the handsome president of the company. Chiwa eventually agrees in order to help her family, and Hokuto agrees because he wants to please his grandfather (and see if he can further his career).

So the two get married, and then… well, they’re not sure what to do. Both Chiwa and Hokuto have moments of being cool characters, but then there are also scenes were they do obnoxious, stupid things. Happy Marriage?! is a romantic comedy, though so far it’s not super funny (at least not in comparison to Butterflies, Flowers, a somewhat similar josei title VIZ also released). But that’s not to say Harry Marriage?! is missing its mark. It doesn’t have the same vibrancy and humor as Butterflies, Flowers, but it feels as if it’s still setting up its characters and feeling itself out in this first volume.

Every romantic comedy needs two strong lead characters, and I’m not sure what to make of Hokuto. He has that dark, brooding hero look, and at times he comes off as seductive and alluring. At other times I think Chiwa’s just better off without him. You know they’re going to wind up a real couple in the end, no matter what, so the real test is how well the characters grow and how fun the stories are in the interim.

The cover caused me some concern, because I feared Hokuto holding Chiwa’s wrist might mean I was about to read a rapey manga. That, thankfully, is not the case. The art is nice, clean and sensual-looking at the same time. The first volume of Happy Marriage?! doesn’t have me clamoring for the next, but I’m curious where it will go and I plan to find out. Despite a “Mature” rating, this first volume feels more like a 16+ read.