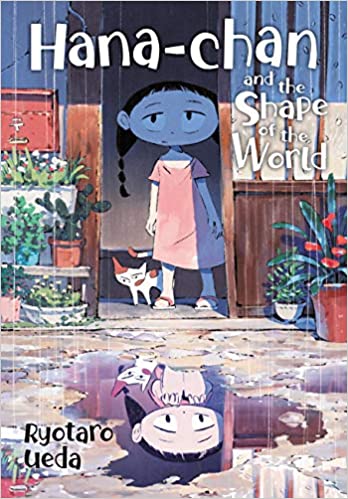 Hana-chan is a little girl who follows her own heart and imagination, no matter what adults say, and sometimes gets herself into dangerous situations. But even in these dangerous situations everything works out in the end, as if she knew it would. Another kid might get killed, but that’s not the point of this story. This story is about innocence and magic.

The manga opens with Hana-chan on a rainy day, filling her rain boots with water. It doesn’t cross her mind that the reason people have these boots is to keep their feet dry. She just thinks it’s fun to run around with all that sloshing. And that, in a nutshell, is Hana-chan. She runs out into the middle of a typhoon to get chocolate puffs, or she ends up around giant robots. It’s not really clear if this is her imagination, or if the book is going for magical realism and these things are literally supposed to be happening to her. It’s confusing that way, but this might be part of the point. It feels like a manga that’s going to go off on a philosophical point, though it never does. But, again, this could be part of the point it’s creating. It seems it’s just going for that simple childhood magic where everything feels possible, before reality really sinks in.

Hana-chan and the Shape of the World is a single volume manga. One of the things that sticks out about it, besides its unusual story, is that the artwork is different from a lot of manga. Hana-chan has a football-shaped, oblong head, for one thing. And her cat, whom you can see on the cover, looks as if it’s inspired by Picasso, because its eyes don’t like to match up. The artist is good at showing humor in characters’ expressions, especially Hana-chan’s friend Uta-chan, who sometimes gets dragged along with Hana-chan’s wacky schemes. Hana-chan and the Shape of the World might be different from most manga, and it might not be for everyone, but it goes down its own path like Hana-chan and revels in its imagination.

hana-chan and the shape of the world 1