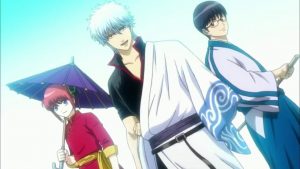 When the Gintama anime adaptation returns this July, we can look forward to new opening and ending themes. As revealed on their respective websites, performers this time around will be SPYAIR on the opening and CHiCO with Honeyworks on the ending.

Gintama‘s July return follows a hiatus that kicked off after March 25’s episode 353. The next set of episodes will cover the Silver Soul arc’s climax.