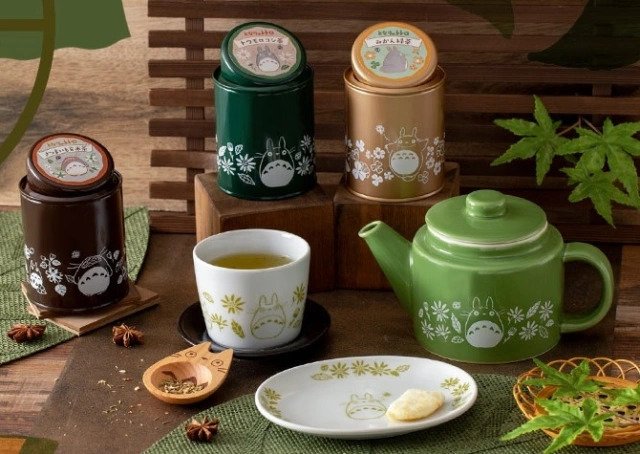 There’s a lot of merchandise dedicated to My Neighbor Totoro, and now this includes Totoro’s own tea set! And that’s not just stuff to drink tea out of . . . it’s actual kinds of tea, as well!

The teapot and Japanese-style teacup are made from Hasamiyaki ceramics, which is part of a tradition of making ceramics in Hasami, Nagasaki prefecture. This is a tradition going back hundreds of years, and is continued here.

Tea time isn’t just for drinking. There’s also a snack plate so you can put any foods on. If you look closely, you can see a little soot sprite hanging near Totoro. And the set’s tea scoop is molded to look like Totoro as well.

Moving on to the themed teas, the first offering is a green tea with mikan flavor, referring to a type of mandarin orange. Then there’s a brown rice tea with a sweet potato aroma. Last but not least is the corn tea. The flavors seem to be references to country living.