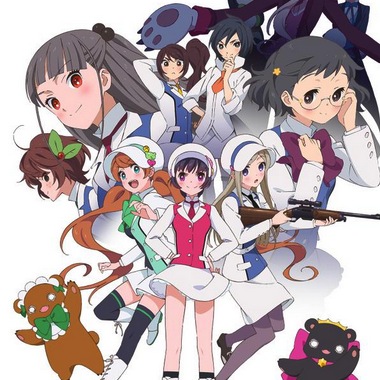 Yurikuma Arashi, the latest anime series by Sailor Moon and Revolutionary Girl Utena director Kunihiko Ikuhara, will be available to stream alongside its Japanese airing thanks to FUNimation. The series has been added to FUNi’s winter 2015 simulcast lineup, and you can read the full synopsis below the announcement tweet.

Announcing! We have acquired the rights for Yurikuma Arashi for our Winter 2015 Simulcast! https://t.co/4RkxcBfl6J pic.twitter.com/MqjZF0aEtf

After an asteroid explosion and meteor shower lit up the sky over planet earth, strange adorable bears began to attack and devour humans. The earthlings responded with violence of their own, and in the end, a massive barrier – the Wall of Extinction – was erected to separate man from bear. This fragile peace lasted until two high school girls encounter a yuri flower blooming – only to be shaken by the piercing warning of the Bear Alarm! Once again, bear and man- or bear and girl -will be pitted against each other in a deadly and mysterious showdown—brought to you buy Kunihiko Ikuhara, the director of Sailor Moon and Revolutionary Girl Utena.

Crunchyroll will stream the series for international users.