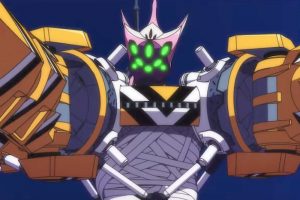 A teaser for the fourth Rebuild of Evangelion anime film, Shin Evangelion Gekijou-ban:||, recently played before Mamoru Hosoda’s MIRAI in Japan, announcing a 2020 release window in the process. Now the teaser for the Hideaki Anno-directed feature also known as Evangelion: 3.0 + 1.0 has made its way to YouTube, so you can watch Mari blast away in the spiraling 22 seconds of footage below.