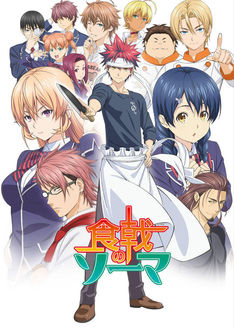 Food Wars: Shokugeki no Soma, the popular anime about the trials and tribulations of young chef Soma Yukihira, is coming back for a second season, and now both the title and release season have been announced.

Season two of Food Wars will be called Shokugeki no Soma: Ni no Sara, which translates as “The Second Plate.”

Keep in mind that’s a direct translation of the Japanese title: the eventual official English title may differ.

In any case, The Second Plate will begin airing this summer season.

The first season of Food Wars ran from April to September of last year and was simulcasted by Crunchyroll. Sentai Filmworks has licensed the series for American video release. The manga is being released in English by Viz.