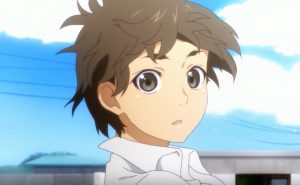 GKIDS is bringing director Nobuyuki Takeuchi and chief director Akiyuki Shinbo’s anime film adaptation of Shunji Iwai’s Fireworks drama to theaters in the U.S. on July 3, and a new English-subtitled trailer is here to preview the feature.

Fireworks has producer Genki Kawamura attempting to follow up the success of his previous hit, Makoto Shinkai’s Your Name., and we’ll get to see if Fireworks hits the mark soon. The July 3 premiere will take place at a special Fathom event, the official wider theatrical release is scheduled for July 4, and encore screenings will follow on July 5 and 7.

Ticket and theater details will be available soon on the official website.

Producer Genki Kawamura follows up his mega-hit “Your Name” with another tale of star-crossed teenage lovers and a sci-fi fantasy twist. “Fireworks” tells a simple story of adolescent longing that taps deep wells of emotion. It is tale of youthful wistfulness, missed opportunities and long-ago dreams, of the urgency of young lovers, and the desire to create a separate universe, a magic place outside of time, where they can be together.