Final Fantasy: All the Bravest 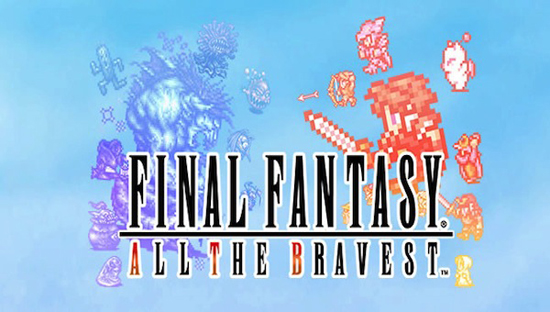 Square Enix’s mobile gaming division has been the subject of much scorn from press and players alike, primarily for their absurd pricing schemes. It’s hard to justify spending $20-ish for arguably inferior ports of DS titles like Final Fantasy III or The World Ends with You, and original iOS games tend to follow similar nickel-and-diming patterns of giving a free trial and then charging piecemeal to continue the game or obtain various in-game items.

But by far the most irritating habit Square Enix mobile engages in are “paid demos”: games where you pay upfront for the game only to find out that a good chunk of the content you thought was free is still behind a paywall. Despite this practice ruining the otherwise beautiful and brilliant Demon’s Score, Square Enix has carried it over, undeterred, to Final Fantasy: All the Bravest. And this time, the game’s barely even worth paying for to begin with. 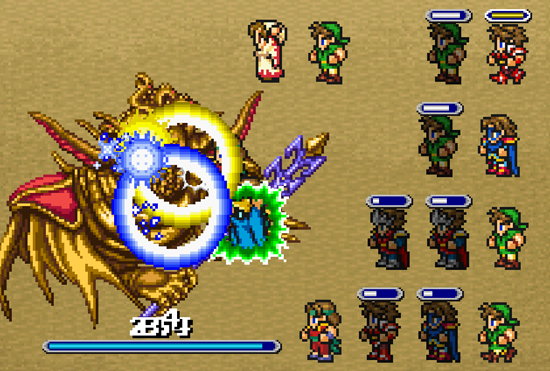 All the Bravest is based on the stylings of the “classic” era Final Fantasies – meaning the games from the 16-bit era. It’s so based on them, in fact, that about 75% of the graphics are lifted wholesale from these games with next to nothing changed about them. The combat—and the game is nothing BUT combat, so don’t expect any riveting character drama—is based around the classic Final Fantasy Active Time Battle system. You touch a unit, it attacks the enemy, and you wait for it to recharge before you’re able to attack again. What makes things different this time is that this isn’t a three, four, or even five-person party: You can have up to forty little FF sprites hacking away at foes all at once. As your party grows, it becomes considerably harder to tap each little party member individually, but since rubbing the screen furiously with all your fingers can send all your available troops to attack at once you’ll probably just resort to doing that after a while.

Things start to get messy when the enemies fight back, though. You can’t actually lose battles in All the Bravest, but you can be highly inconvenienced by having all of your team wiped out. A single attack is enough to eliminate any party member, and they’ll only come back if you wait for about three minutes or so. If your whole party gets wiped out, you can simply wait until some of them return, or go watch a movie or something until the whole party revives. But you don’t necessarily have to wait, as you can use a Golden Hourglass to revive the whole crew right away… in exchange for real-world cashola, of course. Then you can rub away for the minute or so your party will last when fighting some of the tougher foes, only to be presented with the choice to wait or pay up again. 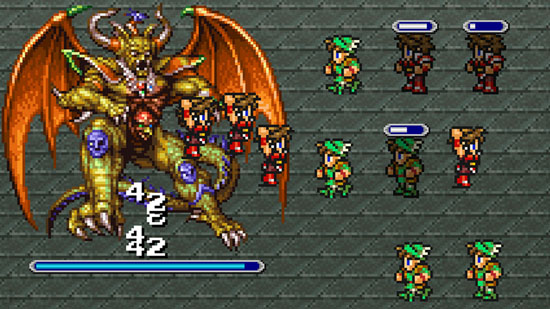 But wait, there’s more! While you’ll acquire most of the famous FF series jobs over the course of the standard games, you can also pay 99 cents a pop to download a random FF sprite based on (some) characters everyone actually knows and cares about! No, you don’t get to pick, so if you get the Magitek Armor instead of Kain or whoever you’d better be happy with it. (If you do buy premium characters, pray you’re lucky enough to get Aerith, as her revival spell saves a lot of time and potential money spent on waiting for parties to recover.) You can also buy additional areas based on FFVII, X, and XIII, which are noteworthy in that they actually feature some original sprite designs—but also cost $3.99 each, which is how much the base game itself costs. So you essentially pay the full price of admission to buy an area that’s a fraction of the size of the base game. Value!

The thing is, while the game is brainless and prods you for money at every opportunity, it’s not completely devoid of merit. It’s a decent, mindless timekiller in short bursts, the new artwork that is in the game is well done, and the localization is superb. In fact, the jokes and the super-nerdy Final Fantasy references by themselves might have been worth the price of admission if everything else weren’t so offensively designed to milk your iTunes account dry. 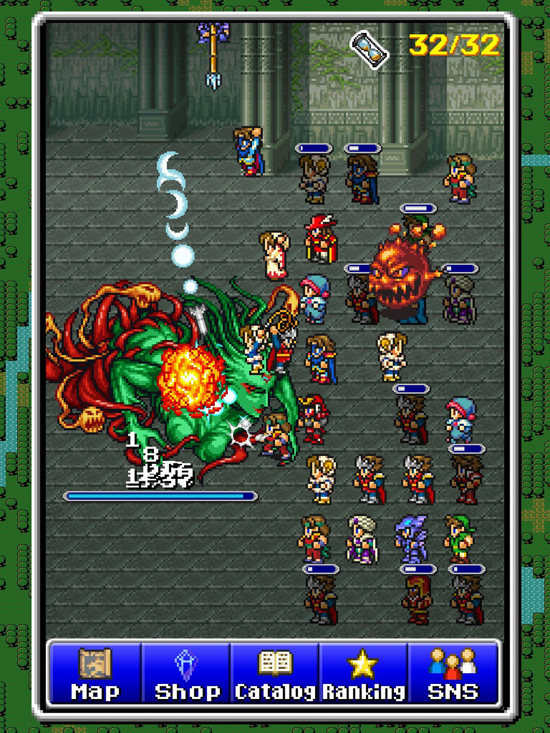 If FF: All the Bravest were a free app where you could pay a couple bucks to pick out some characters you liked to join your band, it would be a perfectly okay fanservicey time-killer app. But when you add everything up, the cost totals above that of a full-price 3DS or Vita release—you know, games that generally require things like skill and strategy and not rubbing your device’s screen like you’re an enraged Red XIII trying to claw off a screen protector. Will Square Enix ever really pull their mobile strategy together? If this game is any indication, they have a very long ways to go yet.