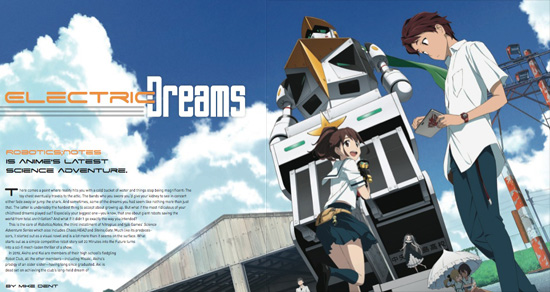 Nitroplus and 5pb.’s science adventure visual novels—which include Chaos;Head and Steins;Gate—are getting a new chapter in the form of Chaos;Child. While we wait for that, however, there’s no better time than now to take a look at the anime adaptation of another installment that also started as a visual novel, Robotics;Notes.

In the new issue of Otaku USA magazine (on newsstands now, just look for the hard-to-miss Evangelion 3.0 cover), Mike Dent digs into Production I.G-produced series, which features direction by Kazuya Nomura (Sengoku Basara: Samurai Kings 2, episodes of Xam’d and Tweeny Witches). The hook in this one is dreams, and while we may not always see our own come to fruition, Robotics;Notes explores what happens when doing so doesn’t go exactly as planned.

Read our full story on Robotics;Notes in the February 2014 issue of Otaku USA Magazine. On sale now, it also includes in-depth coverage of Evangelion 3.0, Captain Harlock, and more of your favorite anime, manga, games, and music.

Steins;Gate Franchise to Celebrate 10th Anniversary in a Major Way

Get a Year of Otaku USA for $12 with Our Holiday Offer!
Feature Watch: Harlock in the Sea of Stars!