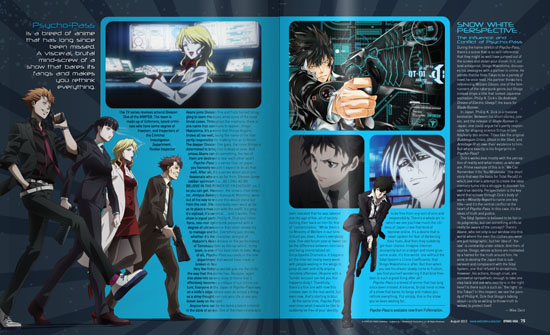 As our bold contributor Mike Dent points out in his cover story feature on Psycho-Pass, perhaps the most terrifying thing about the anime series is how close its reality is to our own. Not that we have Enforcers stomping around trying to put a stop to future crimes that may or may not be committed, but there are eyes on us at pretty much every turn. Social media puts us out there in ways that weren’t possible before, and we’re more than a little open when it comes to projecting our thoughts to the world online.

While those thoughts and words can indeed land you in hot water in our reality, things can be much harsher in the world of Psycho-Pass. With every man, woman, and child fitted with the titular device, the mere possibility of someone committing a crime can be determined, and, depending on the ranking, can even result in a termination order. Intentions, no matter how innocuous they may seem, can be killer.

Mike digs into an overview of the series, which he calls, “a breed of anime that has long since been missed. A visceral, brutal mind-screw of a show that bares its fangs and makes you rethink everything.” Read more about what he has to say, including a sidebar on the ever-present Philip K. Dick connection, in the latest issue of Otaku USA magazine. 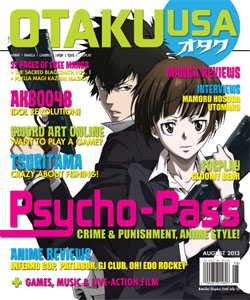 Read our full cover story on Psycho-Pass in the August 2013 issue of Otaku USA Magazine. On sale now, it also includes in-depth coverage of Sword Art Online, AKB0048, Mamoru Hosoda, and more of your favorite anime and manga. 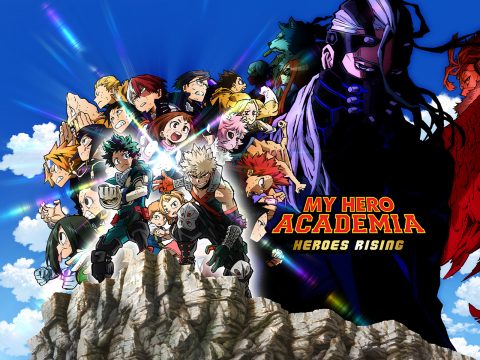