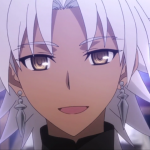 Fans looking forward to the Fate/Apocrypha anime found themselves having to wait until this past November to watch it… and that was just the first part. If you already burned through those episodes and are chomping at the bit for the rest, the wait is almost over, because Netflix has part two listed for a February 9 U.S. premiere.

The theft of the Greater Grail from Fuyuki City leads to a splintered timeline in which the Great Holy Grail War is waged on an unprecedented scale.