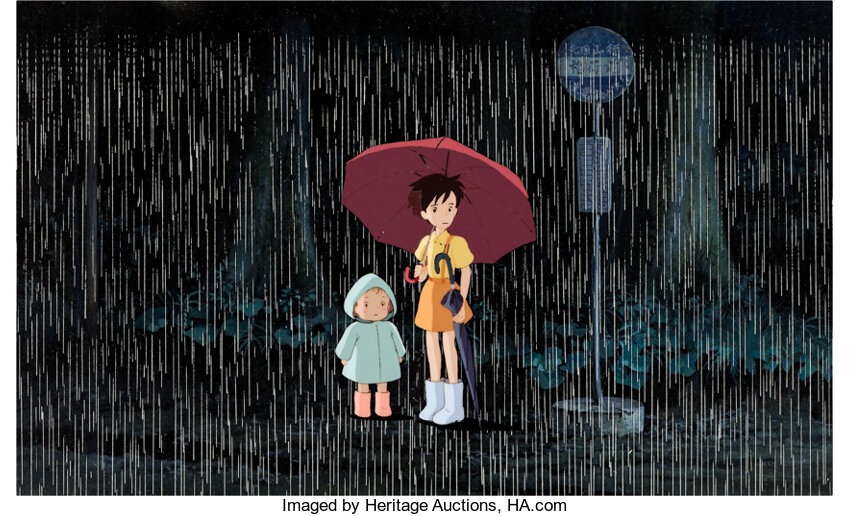 This past weekend Heritage Auctions’ The Art of Anime and Everything Cool Signature Auction brought in $2,118,954, breaking records. Mike Glad, the original owner of the collection, first got interested in anime art through his friend John Halas of the British animation company Halas and Batchelor.

“He told me about Tezuka and Renzo Kinoshita, and they were both in his book Masters of Animation,” Glad told Otaku USA. “I wrote to both Renzo Kinoshita and Tezuka. Tezuka responded. Kinoshita didn’t. Tezuka sent me a cel, a water colored painting and a model sheet. I thought they were great. So then I started exploring further.”

His next good contact was his friend Jerry Beck. “He and a guy named Carl Macek pitched a company called Streamline Pictures and they did the distribution of Akira, among other films for the Japanese studios. None of the big studios (albeit Disney or Fox) would do the distribution. They felt that anime was a sort of third world culture. Jerry had talked to the producers of Akira and they were going to throw all the artwork away.”

Thankfully, the artwork was saved. “Jerry said, ‘Don’t do that, I’ll take some.’ And they sent him it all, every single frame they had left. Of course Carl ended up with it.”

And then Glad ended up with some of it from Macek. “I had been doing other art shows of animation, and I had done a show called Oscars in Animation. Every image in that show was from an Oscar winner. There weren’t any Japanese Oscar winners. I met a girl who worked at the Frankfurt Film Museum, Jessica Niebel. Jessica came to my house for inventory and I showed her the Akira and Tezuka materials and Robot Carnival I’d managed to accumulate because I thought it was really neat.”

Niebel suggested they do a show of his anime collection. “Off went the Oscars in Animation. With the idea of doing the show in Germany, I started pursuing it [anime collecting] a little more. The lion’s share of what I got comes from Carl Macek. A guy Robert Zymet [of DeCarrera Fine Art] got me a lot of the Miyazaki material in L.A. They weren’t giving this stuff away at this point. Everything Miyazaki was expensive. Nothing like what the pieces sold for [this past weekend], but they were thousands of dollars, not hundreds of dollars. I kept studying anime, trying to get the right material so we could tell the history of anime in Frankfurt.”

And how did the anime exhibit do? “It was a blockbuster,” Glad recalled. “We got tons of people at the opening, more than almost any show I’ve ever done. The enthusiasm for it was great. Then they set it up to go to the Louisiana Museum in Denmark, which is a fine art museum interestingly enough. We displayed it there, and then there was a museum in Belgium, in Ghent. I think there was another in Potsdam, Germany, and it was also displayed at the Motion Picture Academy at Beverly Hills. All that traveled over quite a few years, and the material ultimately ended up back with me. One night I was on the Internet and they gave the auction results at this place in Hong Kong and they had these anime pieces that sold quite impressively.” 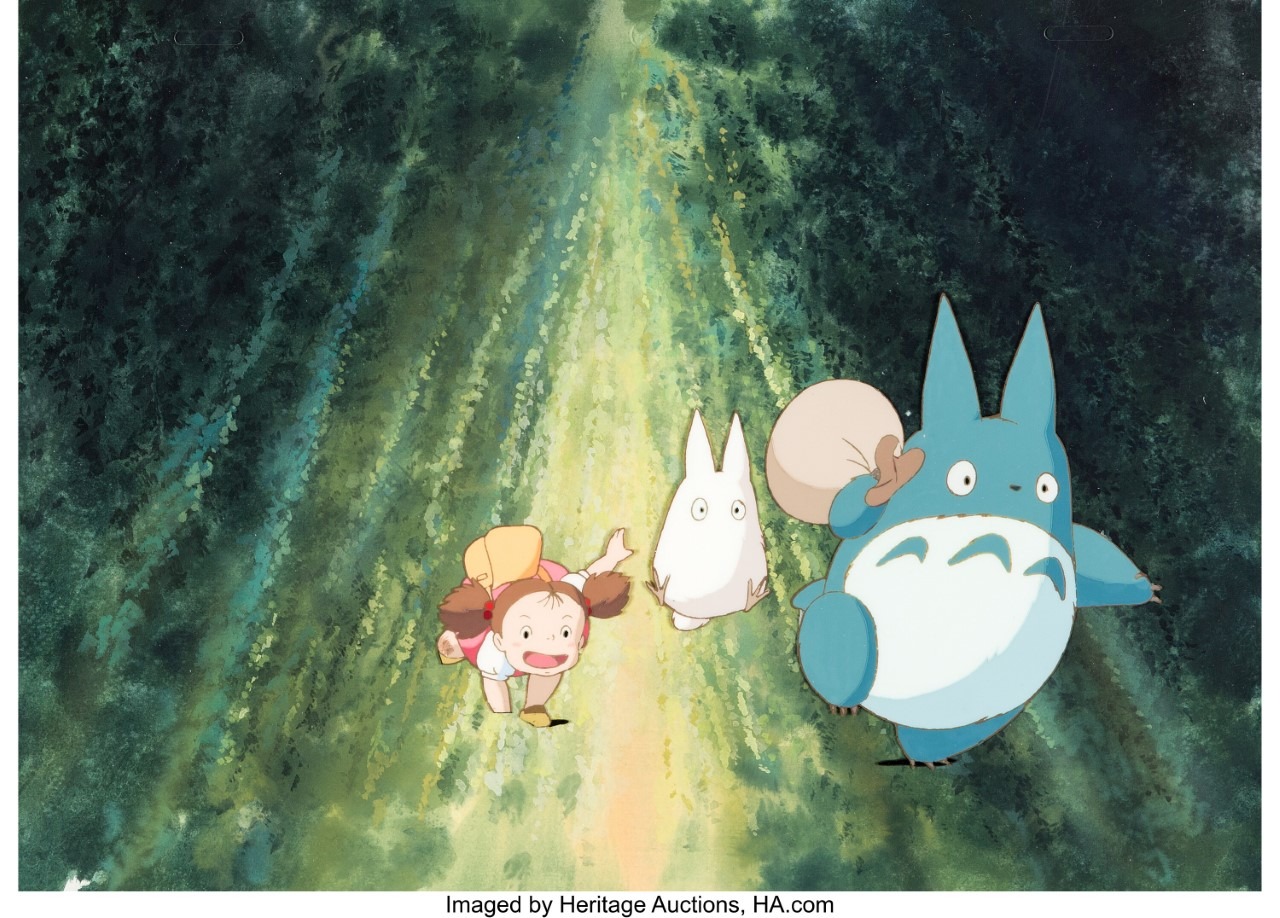 With the show over, he decided to sell his collection, and he knew exactly who he wanted to work with for the auction. “I knew Jim Lentz [Director of Animation Art at Heritage Auctions] personally. We had similar careers at one point and I always respected his integrity. We got together and I said, ‘Look, here’s the idea.’ He got fired up. And as it turned out, it was quite rewarding, too. I hadn’t anticipated it would behave at all like it did, but it was fun to do.”

His entire anime collection is not gone. In fact, he took part a little in the auction himself. “I did buy back three of the pieces. The Renzo Kinoshita I got because it’s inexpensive and I think he’s overlooked yet he did a very important film. I also got one Miyazaki little piece, and one Robot Carnival that happened to be my favorite Robot Carnival. So if I ever do a show called Masters of Animation, at least I have something to offer. And by the way, I paid the same premiums as everyone else; I didn’t ask for a break.”

He talked about some of his favorite pieces. “Obviously the main characters, whether it be Sailor Moon or Pokémon, getting a good image from them is quite rewarding because it’s recognizable to people and it’s what they gravitate towards. [Kaneda] on the motorcycle [from Akira], how do you top that? I think that’s about as good as it gets. Three pieces that stand out to me happened to be the ones that sold for the most.”

And he talked about his love of My Neighbor Totoro. A single cel from it received $78,000, the most for anything at the auction. “I love that film. I loved it before we could even get it in English. I could only watch it in Japanese. I think it’s a great film; it’s so positive and reinforcing. It’s iconic for sure.”

As a final thought, Glad said, “Heritage Auctions impressed me immensely, and Jim Lentz is knowledgeable. A couple of the pieces they sold in anime were as strong as the best of animation from Walt Disney, Warner Brothers or any of them. It says a lot about what we accomplished. I think there will be lots more anime sales. I love to see it being collected, and I think the future is really bright.” 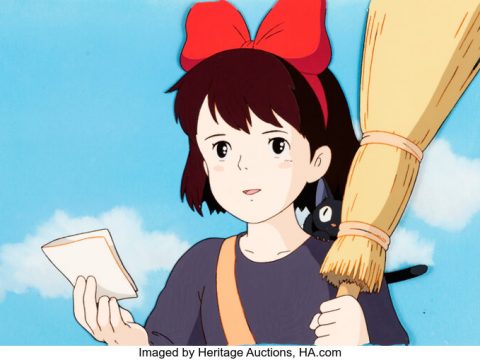 I Know That Voice! — Three Roles by Norio Wakamoto
My Next Life as a Villainess Hits the Stage with Play Adaptation