ERASED is an Early Contender for Anime of the Season 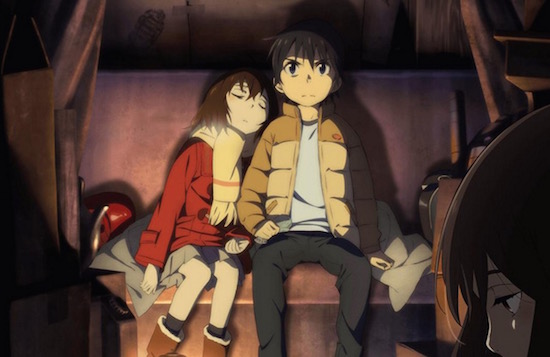 Revival: a phenomenon in Satoru Fujinuma’s life where he is involuntarily sent a few minutes back in time to prevent life-threatening tragedies. After coming home to find that his mother has been murdered and he’s the prime suspect, Satoru wakes up 18 years in the past. Now as an 11-year-old he must stop the chain of events that led to his mother’s death by saving his classmate from being murdered.

I was hooked after watching just one episode. ERASED (Boku dake ga Inai Machi) really knows how to draw the audience in. The introduction to Revival was handled especially well. We’re given the exact amount of information we need about it. It’s not particularly important that we know a lot about this supernatural force. At least with the way it affects the plot so far, I’d say any more information about it would be extraneous and lead to unnecessary complications down the road. ERASED is much less about a boy with superpowers than it is about a boy desperately trying to create a better future.

What makes ERASED even more unique is that it feels much more like a film than a television show. The aspect ratio and directing style makes me feel like what I’m watching would be right at home in a movie theatre. These choices makes the winter setting look even more gorgeous.

I’m really enjoying the strongly-written main character. In the present time Satoru is a 29-year-old who is filled with regret because he feels like he squandered his youth, which prevented him from fully living his dream as a manga author. This fits in very well with the plot point of him going back to the body of his 11-year-old self. I’m curious to see how this is going to motivate his character as the series continues.

Even characters beside Satoru are handled well. Children are often underestimated and observe much more than you think. The children are more complex than what is normally seen in anime, yet they still feel like actual kids instead of ones who act like adults. This shines really well in characters like the classmate who got angry at Satoru for throwing an ice-skating race against him.

The first three episodes of ERASED give me high hopes for the series. Its unique concept, great story and cinematic feel all make me want to see the next episode as soon as possible. It’s definitely a strong contender for anime of the season in my eyes.

ERASED is currently streaming on Crunchyroll.