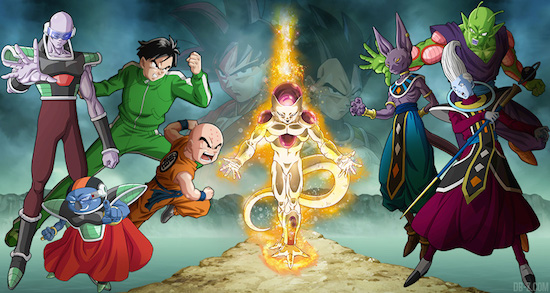 There’s something special about Dragon Ball Z lately. The series has always had its charms, but Akira Toriyama’s renewed involvement in the franchise has really sparked the fun that puts it at its most enjoyable. Dragon Ball Z: Resurrection ‘F’ is no exception, delivering both a healthy amount of action that everyone who still shouts “ROCK THE DRAGON,” poe-faced and decked out in a grim club shirt, will love, while never losing sight of the lighter side of a world on the brink of destruction.

When we first join our heroes—following the events of 2013’s Dragon Ball Z: Battle of Gods—everyone’s kind of doing their own thing, oblivious to the fact that Frieza’s incompetent lackeys now have their hands on Earth’s Dragon Balls. With some help from poor Pilaf, Mai, and Shu, they manage to wish Frieza’s sliced and diced body back from a candy-coated Hell that’s been driving him absolutely mad. At last, one of the series’ most iconic villains has a golden opportunity to get revenge on the Saiyans who forced him into dirt nap city, but he’s going to have to do a little training to catch up to where the mighty Goku is at this point.

Fast forward a few months and we have Jaco—of Toriyama’s great Jaco the Galactic Patrolman manga—rushing to Earth to herald the return of Frieza… at the very last minute. Before you know it everyone’s back together, mustering all their strength (and gathering all their Senzu Beans) to face off against Frieza’s army of a thousand soldiers. 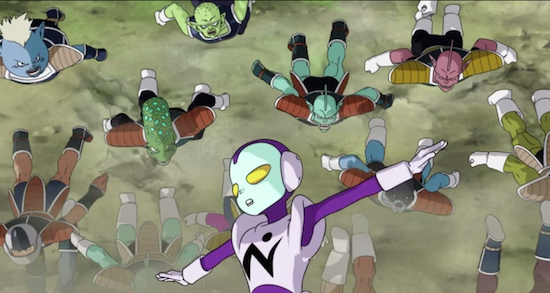 Dragon Ball Z: Resurrection ‘F’ doesn’t stray too far from the formula of previous DBZ movies, and that’s just fine. While it’s only been a couple years since our last reunion on the big screen—and Goku and friends are currently hard at work in their first TV anime in 18 years, the I-can’t-believe-it’s-not-simulcast Dragon Ball Super—it’s still refreshing to see things more or less as we left them. Sure, the coat of paint on the production is a little slicker, for better or worse, but Resurrection ‘F’ has that solid mix of comedy and action that Toriyama does so well.

If you’ve seen any promos or posters for the flick then you know Frieza got hit with that King Midas touch. The best part is how they don’t take his new form too seriously, but also don’t play it for laughs. There’s a thin line walked there, and Resurrection ‘F’ reaches Peak DBZ when Goku and Frieza calmly stand facing one another, taking turns showing off the new forms they’ve obtained since last they met. Goku takes some light jabs about his blue-haired Super Saiyan God form, while Frieza insists everyone keep things simple by referring to his form as, you guessed it, Golden Frieza. 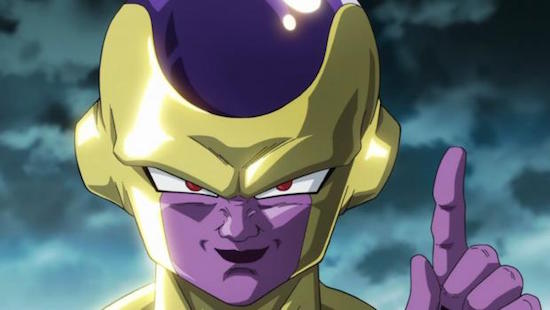 The ensuing fight is a good one, as is the preceding full-on brawl against Frieza’s army. There’s little to no tension, of course, and there’s never any doubt that Goku will find a way to best Frieza before he can destroy the world. Even Goku doesn’t seem worried for more than a few seconds throughout the movie. Jaco actually ends up stealing the show away from the rest of the main DBZ cast on a consistent basis. His appearance and involvement in the first big battle will be an even bigger treat for anyone who read his manga and already has a grip on his personality and purpose. Characters like him remind us that it doesn’t really matter who the enemy of the hour is after all.

Go into Resurrection ‘F” expecting nothing more than a fun, action-packed Dragon Ball Z movie and you’ll definitely come out satisfied. Some of the computer-generated stuff is a little disappointing, and it’s probably nostalgia that has me longing for the less spit-shined days of DBZ, but overall Resurrection ‘F’ is another entry worth busting out the Shenron-emblazoned club shirt for. I didn’t get a chance to see it in the theater, but I did check out the dub, which is good enough that I could hardly tell the difference between it and the last time I heard the DBZ dub, which was probably in the ’90s. I wouldn’t pass this one up if there’s a showing near you and you’ve got a Z-loving group to take along for the ride.