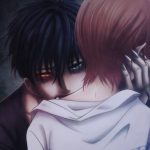 Ryo Hanada‘s urban fantasy manga Devils’ Line is about to make the leap to TV anime. The adaptation of the manga, which is available in English from Vertical Inc., is set to debut in Japan this April, and a new promo is here to tease the bloodsucking action on the horizon.

Yoshinobu Tokumoto and Hideaki Nakano team up to direct the anime, which is being produced over at Platinum Vision. Check out the latest footage below.

Here’s how Vertical describes the series:

Tsukasa, a college student, is rescued from an attack by a devil, one of many vampires that can blend in among the human population. Anzai, her savior, is a half-devil who exploits his supernatural gifts as a member of a shadowy police task force that specializes in devil-related crime in Tokyo. As Anzai continues to keep guard over Tsukasa, the two quickly forge a tentative bond—one that Anzai fears will test his iron-clad rule of never drinking human blood…