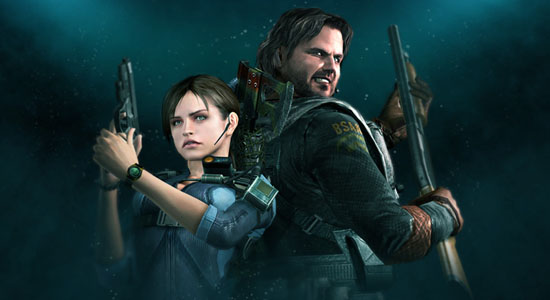 Although Resident Evil: Revelations promises to include underwater enemies for the first time ever in the Resident Evil series, you will not get any of that action in the demo that was released last week. This is a pity, but it’s free, so what are you going to do?

The demo starts you, Jill Valentine, off in the awkward situation of waking up in someone else’s bed. On a cruise ship. In the Mediterranean Sea. I can’t tell whether it’s the just bad dialogue or an altered mind state that makes Jill wonder where she is, since she does seem to remember her partner Parker Luciani and how to meet him at the bridge. They’re trying to track down an MIA Chris Redfield, whose last known coordinates were hereabouts, but that doesn’t really come up during this short play snippet.

So if you don’t get a taste of the exotic aquatic lifeforms, what does the demo hold in store? How about some light puzzle solving on the touch screen? Jill was pretty well locked up in her guest cabin, so it takes a tiny bit of ingenuity to escape: finding a screwdriver, fiddling with some wire attachments to get the door working—that sort of thing.

A shotgun soon supplements your hand gun, which is good because you’ll want something hefty to blow away Ye Olde Monster Falling From The Ceiling that will still make you jump, even the second time around (—the demo allows 30 plays.) 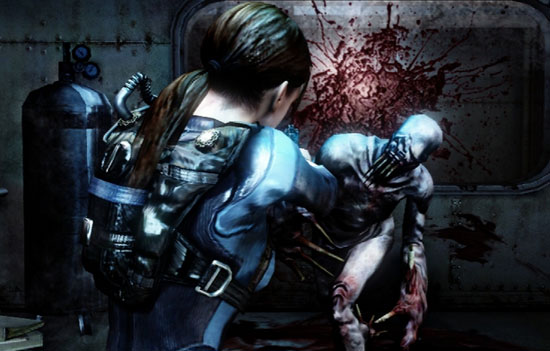 The first time I attempted the demo, I… actually didn’t make it through. I found the Supply Scanner, didn’t really putz with it much, ran out of ammo, used all my herbs, and died a horrible death. Once you figure out how the scanner works, though, it’s actually sort of fun. If you see something in the environment that could be a container, like a box or a drawer (or hey, a covered dinner tray), scanning it could reveal a useful item. Who says no to more bullets?

Really, is it me or are these monsters designed to make you waste ammo? There is a curve to learning the pattern of their swaying as they waggle their heads, making it tricky to pop ’em.

Once I realized the utility of the Supply Scanner (you can scan enemies, too, which will presumably make them easier to kill somehow when you reach 100%?) I backtracked to see if something was maybe hidden in the toilet of my cabin, like mad millions of customization parts (which do exist) or something, but was sadly disappointed.

A quick word on the touch screen, since you can technically reload and switch weapons there. I couldn’t tell if it would be better for me in the long run to embrace poking at it or just get used to the fact that I could only switch primary weapons by pressing right on the D-Pad, since Left cycles through secondary weapons. As it was, I tend to ignore touching in the midst of a fight, and poke more when I was preparing for the possibility of something popping out around the next corner. I miss the big, simple touch screen buttons from Resident Evil: The Mercenaries.

Forging ahead, well, there is no sense in spoiling what happens when you meet up with Parker since really, the demo doesn’t spoil it either! 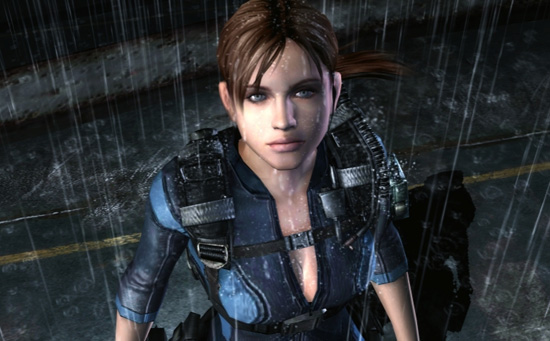 The best part of this quickie download for me was seeing that they’re including the Japanese voice track. The most whaaaaaat part of this demo was seeing that there is an option to use the gyroscope to aim. I tried it and am not sure I really want to fight biocreeps that way, but if you want to check it out when no one is looking, go to town. A pile of other options are included as well, from every combination of axes & inversions known to man, to altering the speed of the aiming cursor, to changing your gun sight from first- to third-person.

It’s hard to decide whether this will be a game worth buying or not from this demo, because a huge part of the fun factor will be how good the water sections are, and, if they are bad, how long and many of them we will have to suffer through. Even just saying “water level” to many gamers will make them cringe, but surely Capcom knows that and is positioning water as a selling point because the swimming controls are… awesome? This is one of the few games where I left the 3D on and proceeded to not really think about it much (i.e. it didn’t bother me), so hopefully the murky depths bits will be good, or at least not objectionable, and we can count this as a solid Resident Evil game and 3DS title.