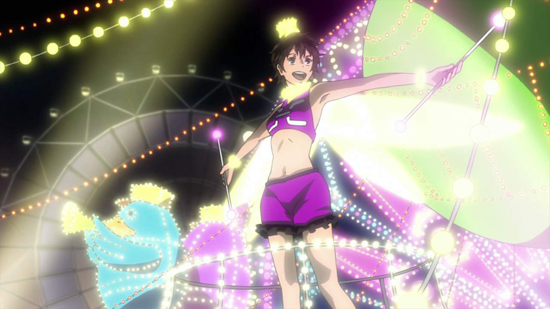 If Deadman Wonderland had been executed in the style of almost any other anime out there, it would take about four episodes to get to the point they’re at by the end of the second. To say the show is briskly paced would be an understatement, and yet it still manages to convey just enough information to the viewer while keeping things really exciting. I’ve only started a few of the Spring 2011 series so far—and to be fair, I’ve yet to start the second season of the always amazing Kaiji—but Deadman Wonderland currently tops my list of new shows.

Ganta Igarashi is living a pretty normal life, enjoying and/or sucking it up to make it through a typical school day, depending on who you ask. His life gets flipped, turned upside down in the least Fresh Princely of ways, however, when a mysterious figure he comes to refer to as Red Man appears outside of his classroom window. Without hesitation, Red Man proceeds to massacre the entire class, leaving only Ganta alive to experience the aftermath right before Red Man imbues the shaken kid with some sort of strange power. 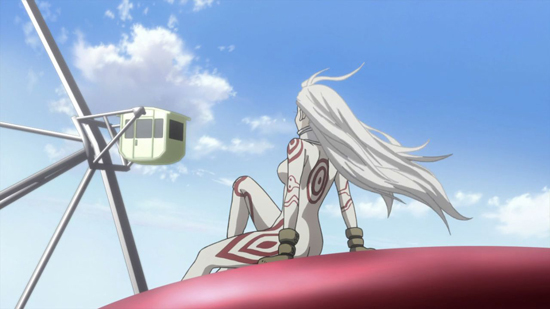 Needless to say, authorities don’t buy Ganta’s tall tale about Red Whoever, and proceed to send him on his way to death row, a sentence he’ll carry out at a privately owned, theme park from Hell prison called “Deadman Wonderland.” He doesn’t even get much of a trial thanks to a shady video that surfaces, showing Ganta himself recounting the mass murder he committed with sickening braggadocio. I think most series would be kicking off Ganta’s trial around the start of episode two, but we’re already ankles deep in Deadman Wonderland at that point, and what a violent spectacle it is.

There’s a lot going on here, and quite a few characters are introduced in the collective span of about 44 minutes (the third episode just landed on Crunchyroll this week). It’s never too much to handle, though, and while I can’t say for sure having never read it myself, perhaps that has something to do with the source material. Written by Jinsei Kataoka and illustrated by Kazuma Kondou, Deadman Wonderland has been running in Kadokawa Shoten’s Shonen Ace since 2007. It’s a shame Tokyopop picked up the manga and started to publish it so close to their untimely demise. 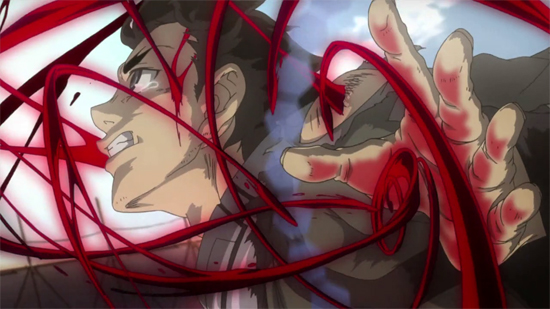 Despite the fact that the show is very fast-paced and packs in a lot of information, it still selectively trickles out the important stuff. Some of the mysteries left open include just why those in charge at the prison are so eager to off Ganta, especially when just surviving day to day life there is deadly enough. As if the inmates weren’t already too much for Ganta to handle, each prisoner on death row has been injected with a slow-acting poison that will kill them in three days time. The only way to stave this off is by ingesting a special candy, and the only way to obtain said candy is by competing in thrill-kill prison games to earn enough credits. It’s a system that’s pretty much designed to make sure everyone on the inside dies, while everyone on the outside remains entertained.

There are shades of inspiration from all corners in Deadman Wonderland, from Running Man to Battle Royale to Death Race 2000. Throw in Ganta’s ever-increasing powers, developed courtesy of Red Man’s attack, and you have a mish-mash of a lot of cool story elements that manage to not come off as overly derivative. Hell, even when it is derivative it’s fun to watch, so Deadman Wonderland easily gets a recommendation from me. You can check the series out on a weekly basis over at Crunchyroll.