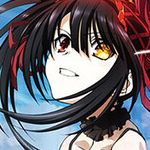 FUNimation will be releasing a Blu-ray/DVD set of the Date A Live anime on June 10, and a new clip recently arrived to preview the English dub.