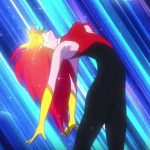 Cutie Honey Universe continues the Go Nagai love fest when it premieres in Japan this April, and two more cast members are getting in on the action. The latest update has Yui Horie and Shintarou Asanuma joining the cast, so see who they’ll be playing below.

Yui Horie will be Honey’s best friend, Natsuko Aki. You may recall that Horie previously played Honey herself in the Re: Cutie Honey OVAs from 2004.

Shintarou Asanuma plays Seiji Hayami, a kind-hearted investigator working alongside Honey as she takes on the Panther Claw organization.

For those who missed it, here’s the previous promo from last month: