Cowboy Bebop Anime Film to Screen in Theaters This August 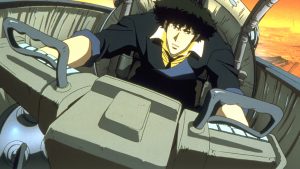 This year marks the 20th anniversary of the Cowboy Bebop TV anime, so there’s plenty of room for celebration. Funimation Films is getting in on the action next month with screenings of the anime film, Cowboy Bebop: Knockin’ on Heaven’s Door, which originally opened in Japan back in 2001. English-subbed screenings are coming to US theaters on August 15, with the English dub to follow on August 16.

Funimation also has a 20th anniversary collector’s edition on the way for the anime series, and Spike voice actor Koichi Yamadera recently shared a message with fans on Twitter.

The Japanese voice for Spike Spiegel, Koichi Yamadera, has a message for North American Cowboy Bebop fans, for the 20th Anniversary!

If you missed our previous post, the writer, character designer, and mechanical designer for Cowboy Bebop are all headed to this year’s San Diego Comic-Con.