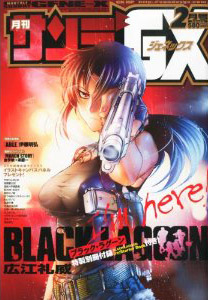 Black Lagoon. It’s been a while, huh? Glad to have you back.

One of the best action manga in recent memory, Black Lagoon went on hiatus back in May 2010 after 9 tankobon volumes-worth of gunslinging, and besides the Madhouse-produced OVA series Roberta’s Blood Trail, creator Rei Hiroe was effectively silent on what he planned to do with the series.

That all changed in March 2012, when Hiroe began to talk about making Black Lagoon again. December 2012 saw Rei post on his personal blog about the series’ imminent return, and now it’s official: the February edition of manga anthology Sunday GX has new Black Lagoon in it.

The new chapter picks up right where things left off back in 2010, and includes part of the chapter that was published right before the series went on hiatus just to give new readers a chance to get back into the swing of things. Additionally, they’ve also included a small extra called the “Black Lagoon (re)Starter Book” which summarizes chapters 77-80 for readers who weren’t following the current story arc before the hiatus.

The next chapter is planned for publication in the March 19 edition of Sunday GX.

Are we excited for more Black Lagoon? I know I am.