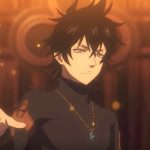 Funimation revealed plans for its SimulDub of Black Clover, which officially kicks off on October 29 at 3:00pm with two episodes. Ahead of that, they announced the cast for the series’ leads and the rest of the characters who will be appearing in the first episode.

The English cast for episode 1 includes:

The English cast announcement for Black Clover is here! See it and when the SimulDub is coming on our blog: https://t.co/ag7WWlAjVa pic.twitter.com/3MdmD8fAlo