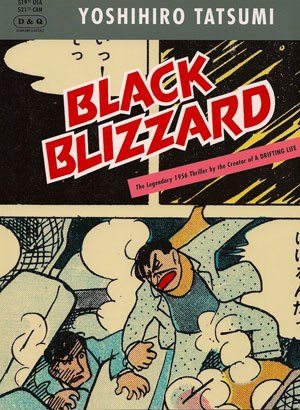 At this point we’ve had fairly ample room to explore some of the principle work from prolific mangaka Yoshihiro Tatsumi. His books published by Drawn & Quarterly manage to paint experienced visions through a lens that can be simultaneously distorted with hope and despair. We’ve even had the opportunity to soak in an overview of his career thanks to A Drifting Life, making the publication of one of his earliest works all the more appropriate. Black Blizzard offers a glimpse at a pro during his formative years, learning the ropes and sweating it out over a self-contained tale of love and death.
Our story begins with Susumu, a young pianist, as he awaits the inevitable. He hardly puts up a fight at all—unless the flails of frustration and defeat count for much—when an officer comes in to arrest him for murder. Next thing we know Susumu is on a train, chained to another criminal, barreling toward his future behind bars until BOOM! A landslide topples the locomotive, trapping the officer and freeing Susumu and his unintentional companion from their fate, if not from one another.
So we have two cons—though the true nature of our lead’s heinous crime remains cloudy and uncertain—chained together, escaping into the snowy cliffs beyond the wreckage. While there, when not debating over which one should lose a limb for the freedom of both, Susumu recalls the events that lead up to the assault he doesn’t remember committing, and the object of his affection at the center of it all.
As the description might lead one to believe, Black Blizzard is a mostly straightforward tale of crime and intrigue and the pressing question of “Whodunnit, ‘cuz I didn’t do it… or did I?” It’s something we’ve read and seen countless times on page and on film in various forms. However, having been written and illustrated in 1956, its adherence to convention is overshadowed by its bold, filmic execution. As stated in an appended interview, Tatsumi was inspired by both pulp magazine stories and Alexandre Dumas’ The Count of Monte Cristo, but his visual structure goes beyond simply drawing from prose for narrative purposes.
Comics fans who have already been through the book might find this an interesting read for a closer look at what I’m getting at. The film influence is there, regardless of whether or not Tatsumi was specifically going for images established by the movie in question. It’s there in the way panels transition from one to the other; it’s there in the title page, on which one can practically hear a rousing introductory score blaring after a Nikkatsu logo transition; it’s there in the basic line work that emphasizes motion and action over detail.
However, those looking for the deeply defined characters of Tatsumi’s later work won’t find them in Black Blizzard. Susumu is as straightforward a lead as can be, Saeko is the flat love interest, and everyone else fits into their respective roles with little fuss; archetypes portrayed as such without shame. This works just fine for the sort of story presented here—after all, what more does this pulpy world need? It makes for 128 pages that can be revisited casually in single sittings (or multiple bathroom visits, if that’s your bag).
As previously mentioned, Black Blizzard should be of even greater worth to anyone that read Tatsumi’s massive autobiographical comic A Drifting Life. It’s one thing to read about the circumstances under which this early work was created, but it’s another entirely to actually read it with that context in mind. It’s like having a piece of manga history in your hands. Ultimately, that may be the comic’s greatest single strength. I certainly wouldn’t recommend it for an introductory dose of Tatsumi. Save that experience for something like The Push Man and Other Stories or Abandon the Old in Tokyo (reviewed here). They may be heavier works, but they’re key to getting a proper taste of the man’s style. After that, Black Blizzard presents to its experienced audience a more substantial layer of growth and purpose.
Publisher: Drawn & Quarterly