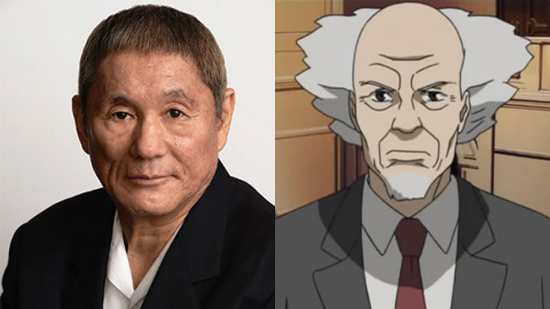 Best known in his home country of Japan as a comedian and daily presence on a number of variety shows, Kitano is better known abroad as a star and director of many arthouse hits, including Hana-bi, Kikujiro, Zatoichi and Battle Royale.

The actor has worked in Hollywood before, appearing in the 90s cyberpunk film Johnny Mnemonic. His own film Brother also took place largely in Los Angeles.

Kitano kicked up some anime-related controversy in 2014, when he declared “I hate anime, and I especially hate [Hayao] Miyazaki.”

In today’s announcement, Kitano echoed that view, saying that while he’s not an anime fan, he was drawn to the character of Aramaki and the film itself, which is “stylish entertainment” and very different from the films he makes himself.