In a wasteland of rusty metal, on a heap of broken robot parts, a scientist finds a young woman’s metal head. Hefting it back to his shop, Daisuke Ido—a surgeon/mechanic who works on both biological and cyborg parts—finds the brain inside still perfectly preserved and soon gives her a new body and (since she has amnesia) a new name, “Alita.” The reawakened Alita fits right in among the Scrapyard, a vast industrial park where cyborgs and full-flesh humans scrabble for survival in the shadow of the floating city of Zalem, which sucks up the resources of the land in giant pipes and spills its garbage in a giant mountain of trash at the center of the city. Daisuke, her overprotective savior, just wants Alita to be beautiful and live a peaceful life, but Alita feels something tugging at her: a will to fight, and muscle memories of performing Panzer Kunst, a powerful Martian martial art. As her incredible combat skill comes flooding back, Alita makes a fateful choice: to become a bounty hunter, fighting the criminals and madmen of the Scrapyard, until she regains her memories of her past!

An immediate hit when it came out in 1990, Battle Angel Alita still stands out as one of the most original and imaginative cyberpunk comics. (Its current reprint edition is probably due to the upcoming James Cameron live-action film coming out in 2018.) Yukito Kishiro’s beautifully dystopian world is one of the most strongly visualized science fiction settings ever, full of grotesque cyborgs that would make artist Kevin O’Neill green with envy, and memorable villains ranging from mad scientists to cruel mercenaries to Makaku, the “cyber-maggot” who forces his

way into other cyborgs’ bodies and replaces their spine (“My life began with fear and pain! These two sensations flow from high hills to low valleys like water. In other words, I can protect myself from them only by inflicting them on others!”). Like all the best dystopian stories, this is a tale about struggling to escape the chains of society and find the truth of power; Alita soon meets and befriends Yugo, a resourceful boy who dreams of leaving the Scrapyard and going to the (so he thinks) paradisiacal sky-city of Zalem, where surface folk are forbidden to tread.

With her enormous Margaret Keane eyes showing her sensitive soul, even as her super-strong Hanns Bellmer doll-body crushes villains’ heads, Alita is a exceptionally well-realized female hero for a manga created by a man: sometimes ruthless, sometimes introspective, but always dealing with the dysphoria of her unfamiliar body and forgotten past (“You wouldn’t understand! How can you know how a person living in a metal body feels?”) The bits of romance among the gut-splattering action are engrossing and believable. Best of all, Alita never falls into a pattern, the story always moves forward with dramatic turns and surprises (at least until the “tournament arc” in the later series Battle Angel Alita: Last Order—but that’s many, many volumes away). A story to savor, this is science fiction at its best. Recommended. 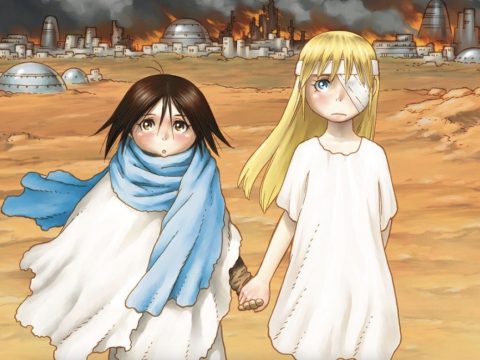