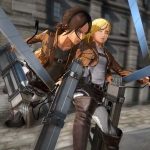 We’re just about a month away from the western launch of Attack on Titan 2, so Koei Tecmo America shared a new trailer showing off the sequel’s multiplayer modes. In addition to cooperative play that takes you through the main story, Attack on Titan 2 has co-op for Scout Missions and the competitive Annihilation Mode.

You’ll also see a teaser image hyping up another as-yet-unrevealed online mode that’s coming after launch, so dig in below.