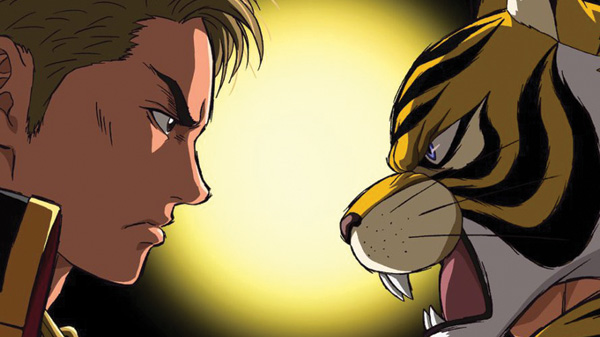 In the early going of Tiger Mask W, a character wonders why the devious Tiger’s Den gym (not to be confused with the heroic Tiger Mask) would recycle 50-year-old gimmicks like Yellow Devil and Black Python in place of creating new ones for its rogues gallery of wrestlers. Sitting in front of the TV, I found myself asking the same question: “Why?” And maybe the answer lies in the past. Or how they want us to respond to it…

It’s 1978 and despite featuring a character named Strong Ricky, Pro-Wrestling Star Azteckaiser is a TV ratings flop. This was a problem for Antonio Inoki, who was depending on Go Nagai’s tokusatsu creation to give his fledgling New Japan Pro-Wrestling a much needed cross-promotional boost. Instead the show was canceled, and plans to introduce a real-life Azteckaiser to the New Japan ring were nixed. The wrestling career of the iconic Ultraman didn’t go much better, with New Japan’s incarnation looking more like a fetishist than a hero to children everywhere. 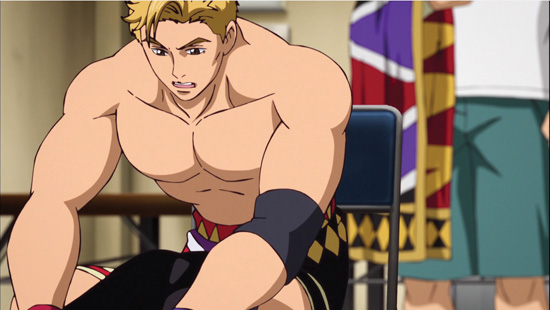 But the third time was indeed the charm when Inoki licensed a long dormant property called Tiger Mask.

The brainchild of artist Naoki Tsuji and sports manga writer supreme Ikki Kajiwara, Tiger Mask first graced the pages of Bokura Magazine in 1968, before moonsaulting onto TV screens courtesy of Toei. Both the manga and the anime followed Naoto Date, aka Tiger Mask, a notorious heel in the wrestling world who went squeaky clean in an effort to dissuade orphans from aping his insidious ways.

So a plan was set in motion: New Japan would partner with TV Asahi on a new Tiger Mask series, to coincide with our main man hitting the New Japan ring, live and in person. But to pull this off they’d need someone extraordinary, superhuman even. They needed Satoru Sayama. 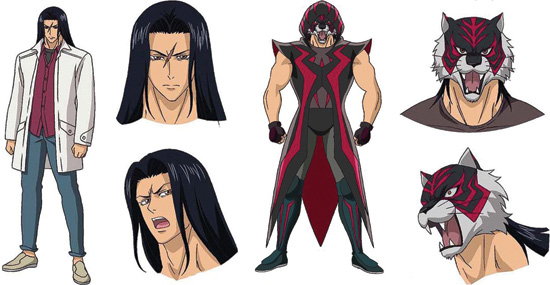 A devotee of legendary ringsmen Karl Gotch and Billy Robinson, Sayama started out in New Japan as a stern, no-nonsense worker who preferred to exhibit his legit martial arts abilities over indulging in theatrics. But on an extended excursion to the UK—where he portrayed Bruce Lee’s long lost cousin Sammy—Sayama would add a healthy dose of acrobatic flair to his devastating arsenal of kicks. His skill set complete, he now was in need of the right vehicle.

He got just that in April 1981, when he debuted as Tiger Mask against Britain’s Dynamite Kid. Sure he was wearing a ski mask with a vaguely tigerish print sloppily airbrushed on, but the action was thrilling. Even if the fans didn’t know quite what to think of it.

Audiences of the era preferred a more deliberately paced affair, with matches resembling a sort of testosterone-fueled stage play. So the high-flying spectacle they just witnessed was written off as nothing more than all flash and no substance. But just as Sayama’s mask evolved into something more resembling its cartoon counterpart, so did audiences. The ongoing contests with Dynamite Kid soon became the stuff of legend. The skeptics became the converted, and new fans were arriving in droves. 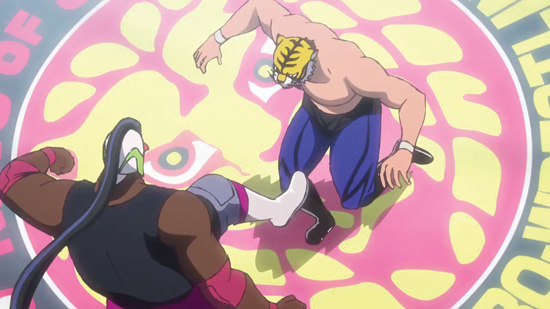 Around this time the animated series premiered on TV Asahi. Dubbed Tiger Mask Nisei, it opened in the most grim way possible: with O.G. Tiger Mask Naoto Date getting creamed in a hit n’ run while saving one of his beloved orphans. From there a fellow brave soul with a soft spot for the parentally challenged slips on the mask, and another war against the evil Tiger’s Den is waged.

This only further raised the profile of New Japan’s live-action attraction. The feline spin-kicker had sunk his claws into the mainstream, and at any given time he could be found on TV performing feats of strength, high-fiving children, or crooning his own rendition of an Elvis Presley classic. And in the ring Sayama was redefining the Junior Heavyweight (or Cruiserweight for you WWE fans) division in ways that are still being felt today. No longer were they merely a band of undersized workers, instead they became a high-flying alternative to the lumbering lugs at heavyweight.

On top of that, New Japan finally captured the all important youth market it had long coveted. Within a year the company netted an estimated nine billion yen in profits, but as the saying goes, “More money, more problems.” And in this case, it was embezzlement.

While savvy enough to see the potential in Tiger Mask, Antonio Inoki was not slick enough to hide the New Japan money he’d secretly been funneling into a variety of failed side businesses. Once caught, he looked to save face by pinning it on NJPW matchmaker Hisashi Shinma—a friend of Sayama’s who was instrumental in him landing the Tiger Mask gig. Enraged, Sayama attempted a coup, but failed. So in 1983, less
than three years after his debut as Tiger Mask, Sayama left New Japan. Shortly thereafter he’d form his own organization, get kicked in the balls by a renegade wrestler, and—bitter and filled with disdain for the industry—write a scathing tell-all.

I’ll give you a second to take that all in.

Looking for quick cash, Inoki would sell the Tiger Mask license to rival promotion All Japan, but the magic had already faded. The Tiger Mask rights reverted back to NJPW in 1990, only by then the Junior Heavyweight division had a new costumed ace in Jushin Liger—a YA Guyver-wannabe created by Go Nagai. Liger would defeat and unmask Tiger Mask III shortly after his debut. If the idea of Tiger Mask as superstar had died back in 83, then Liger just buried him. The gimmick wouldn’t grace the New Japan ring again until 2002. 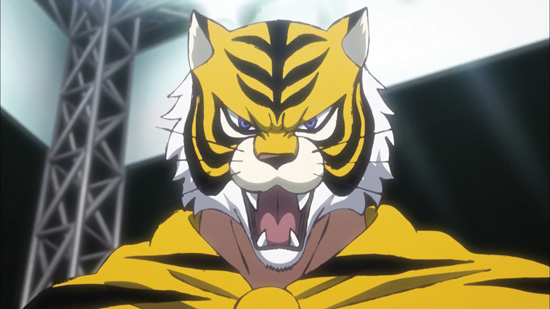 Then in 2016 the news broke: New Japan would once again partner with TV Asahi to produce the first Tiger Mask series in some 35 years, along with the promise of a new in-ring performer.

Cause for celebration, right? Well, not really.

Let’s just get this out of the way, Tiger Mask W is pretty fun. It also does nothing new. Rather than a Tiger Mask for a new generation, it’s a callback fest for fans of the original. With its thickly drawn lines, Osamu Dezaki freeze frames, and funky score, the makers are clearly offering up some Showa era fumes for audiences to huff. The fact that it’s in a late night time slot best fit for snuff films also doesn’t help its chances of bringing in a new audience.

Probably the freshest bit is that instead of fighting for some sad-eyed orphans, Tiger Mask is doing this for a stocky, middle-aged wrestler in a wheelchair. Also added into the mix is New Japan itself, in a war of sorts against the Tiger’s Den-backed GWM (Global Wrestling Monopoly). The intent behind this appears to be satire, but it comes off more like a NJPW power fantasy, with them outsmarting the foreign promotion at every turn. 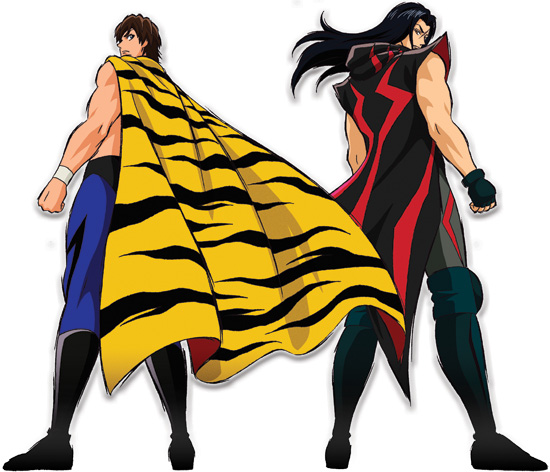 The in-ring debut of Tiger Mask W didn’t go much smoother. With a mask he could barely see out of, established star Kota Ibushi (who is in little need of this gimmick) plied his trade in front of a jaded crowd. To make matters worse, when Tiger Mask returned to the ring a week later, it was just Yoshihiro Yamazaki—who has been portraying the character for some 15 years—in his stale old mask. The audience was vocally displeased and confused.

So again I ask, why? The 1981 Tiger Mask acted as a vehicle of change, a method of bringing in young fans. Tiger Mask W is just a nostalgia act that New Japan doesn’t need. For a company that in recent years has focused on pushing fresh talent, this feels like a puzzling step back. Could no one at TV Asahi envision a Kenny Omega or Roppongi Vice anime? At best this gives a handful of fans a taste of something they remember enjoying once; at worst it veers the promotional train away from burgeoning talent that could use the boost.

In 2014 Azteckaiser finally made his way to the ring in Inoki’s IGF. Guffaws were had, snark was dispensed, a few nodded in acknowledgment, but nobody cared. He was never seen again and the fans moved on. Maybe NJPW should learn a lesson from their old friend and do the same: move on.

Tiger Mask W is currently available to stream on Crunchyroll.

Shout! Factory Licenses In This Corner of the World Anime Film
My Hero Academia Anime Returns on March 25