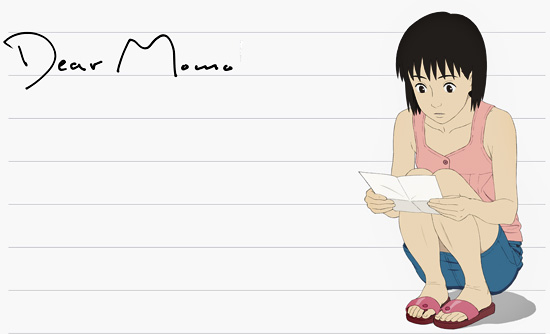 A Letter To Momo (2011) had its American premiere in a digitally projected English-subtitled showing on March 3, 2012 at the IFC Center in Manhattan as part of the New York International Children’s Film Festival. It was produced by Production I.G. and directed by Hiroyuki Okiura, who has one previous directing credit—the alternate reality political thriller, Jin-Roh (1999)—and other animation credits in various capacities, including character design, animation direction and key animation, on a host of celebrated films (Akira, Ghost in the Shell, Ghost in the Shell 2: Innocence, Patlabor, Patlabor 2, Roujin Z, etc.). A Letter To Momo is an ambitious family drama with supernatural elements that runs just over two hours. It’s set on Shio Island off the coast of Japan (but connected by bridges to the mainland) and focuses on adolescent Momo, who has moved there with her mother to stay with relatives after her father has died (in an accident that’s never described). The house she stays in turns out to be haunted by folkloric creatures who’ve come out of the pages of an Edo-period book filled with drawings of demons and spirits. The NYICFF booklet describes them as “goblins,” but to me they sure looked like the “hungry ghosts” of Japanese lore.

These creatures are initially quite a threat to Momo, scaring her half to death, eating all the food in the family kitchen, and following her around the island, seen only by her and, eventually, one other girl. Gradually, she gets used to the creatures and comes to accept their existence, although she still finds them annoying. Like many adolescent girls, Momo has trouble with her mother and a key misunderstanding midway through the film leads to a crisis that peaks just as a typhoon hits the island. Momo’s mother becomes seriously ill, with no doctor in the vicinity, and Momo has to find a way to secure aid, with the goblins’ help, resulting in quite a spectacular climax involving thousands of supernatural creatures. The goblins are named Iwa, Kawa, and Mame, and range in size from man-sized-with-a-giant-head to toddler-size. They are perpetually hungry and Momo, once she’s accepted them, has to find a way to keep them fed. Eventually, we learn that their mission on Earth involves Momo’s late father and the completion of business left unfinished at the time of his death. The film title refers to a letter the father had begun to write to Momo and never completed. (All it actually says is “Dear Momo.”) 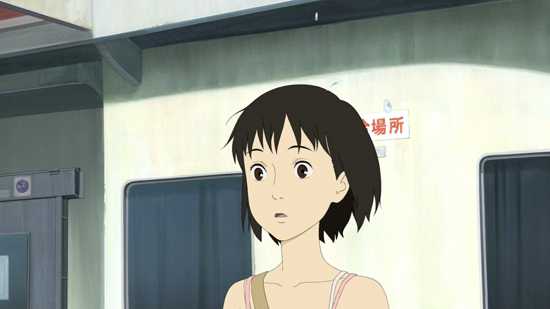 The goblins behave horribly at times. At one point they flee a forest after snatching three baby boars, with the intent of eating them, and are chased furiously by the wild boar parents, who have been frequently blamed for the goblins’ swath of destruction through the islands’ orchards. I have to confess I was rooting for the boars in this one and wanted to see some serious comeuppance delivered. The goblins’ antics throughout are treated comically, and the audience frequently laughed, but I kept thinking of horror anime and the prevalence of demons and evil spirits waiting to be vanquished by the likes of Vampire Princess Miyu, Devilman, Devil Lady, Witch Hunter Robin, Devil Hunter Yohko, and Kujaku-o (from the Spirit Warrior OVA series), among many other demon hunters of anime fame. I couldn’t help but think that what Momo really needed was some help from an exorcist or psychic warrior of some kind, or simply the ability to transform into one, like so many youthful anime heroines (Sailor Moon, anyone?). When the goblins reveal their ultimate mission, which is more akin to that of Clarence the angel in the classic film, It’s A Wonderful Life (1946), I found it hard to accept. The old stories tell completely different tales. Hungry ghosts were not known to suddenly turn all benevolent toward the people they were haunting. 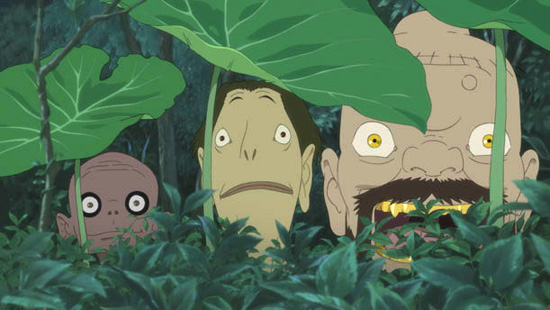 Also, I found Momo problematic. While her adolescent awkwardness is honestly and masterfully portrayed by the animators and the voice actress (Karen Miyama), the other flaws of adolescence—selfishness and stubbornness—are highlighted as well. She does something extremely irresponsible in the final section of the film, just as the typhoon is approaching—an event she’s been made fully aware of—and it puts her mother’s life in jeopardy. She winds up redeeming herself, of course, at least enough to satisfy the demands of an animated feel-good family drama, but any sympathy I might have had for her was long gone.

The theme of family reconciliation, usually between a child and single parent, through intervention by supernatural entities or traditional folkloric figures, is a common one in recent anime features and is, frankly, a bit overdone by this point. (My Neighbor Totoro established the basic model for this genre and still rules.) Director Okiura reportedly spent seven years on this film and while it might have seemed fresh when he started—an attempt at a lower-key, more down-to-earth version of Spirited Away—it has since been overtaken by Ponyo, Summer Wars, Oblivion Island, Mai Mai Miracle, Welcome to the Space Show, and The Secret World of Arrietty, all of which beat this one to theaters and five of which premiered at the New York International Children’s Film Festival. So if it seems like I’ve had my fill of this particular plot device, you may be right. 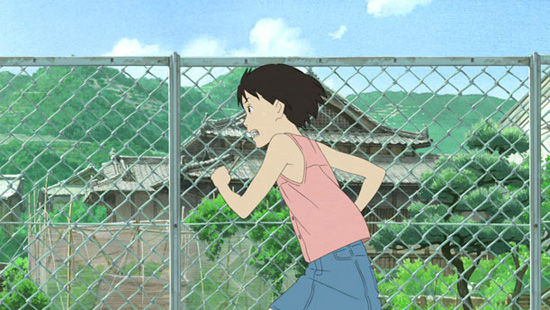 As you might expect, the film is beautifully animated and designed, with detailed renderings of the island’s idyllic small-town agricultural setting and the old houses in which the characters reside. The character design is worth noting for playing up the Japanese features of the characters, something we don’t see often enough in anime. The island residents are all recognizably Japanese. The climactic rescue effort features a veritable horde of spirits, goblins, and forest sprites (reminiscent of the kodama from Princess Mononoke) assisting Momo and her three goblin buddies. It’s very exciting and perks up what had been a particularly draggy final third of an already overlong movie.

The packed Saturday morning festival audience at the film, a mixture of parents and children, some of whom may have been too young to read the subtitles, was attentive and engrossed throughout, despite the long running time, and seemed to laugh and applaud in all the right places. They were clearly much more entranced by the antics of Momo and the goblins than I was and much more forgiving of them. If Kujaku-o had showed up with Buddhist chants and spells designed to blast hungry ghosts into oblivion, I daresay I might have been the only one to welcome him.