A Chat with the Folks Behind DBZ Abridged 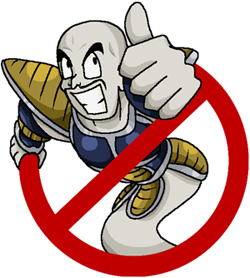 If you haven’t been watching Team Four Star’s Dragon Ball Z Abridged, I think it’s fair to say you’ve been missing out. At Youmacon 2011, I was able to speak with four members of the group: MasakoX (voice of Goku, Gohan, etc.), Takahata101 (voice of Nappa, Guru, etc.), KaiserNeko (voice of King Kai, Gregory, etc.), and Lanipator (voice of Vegeta, Piccolo, etc.).

“I knew we needed a powerhouse team,” Lanipator said about making Dragon Ball Z Abridged. “It’s such a big show, a big iconic show. I said [when I was asked to participate], ‘Okay, but I have two conditions. I want to play Vegeta, and I want to be on the writing.’”

The first night they wrote most of the first episode and came up with Ghost Nappa.

“They asked me if I wanted to be Goku, and I was like, ‘Yes!’” said MasakoX. “I didn’t need any convincing. I was on board full force.”

When it comes to the writing, the people who play the characters usually write those characters. They use Skype to interact. Some feel they’re better at structure while others stick with refining jokes or improv.

“I write witty dialogue and have banter, but the problem is it’s quite highbrow banter in comparison to some of the other jokes,” MasakoX said.

“Yes, that’s the thing,” MasakoX said. “They bring it down a bit and jar it.”

“We spend forty to fifty to eighty hours a week talking to each other,” KaiserNeko said. He explained the breakdown and how it takes about a month to make each episode. A week or two weeks of writing, a week for the voice track, and a week to a week and a half for editing.

Speaking of voice track, one of the things they get asked a lot at conventions is to do their voices. Hearing Nappa’s voice is a major request.

“I came up with the voice and it was like, ‘Oh my God, this is classic,’” Takahata101 said. “I think Nappa’s one of the best idiots. He wouldn’t be as funny if he didn’t have Vegeta to play off, though.”

Was there anything else they’d like Otaku USA readers to know?

“I want to thank the fans,” KaiserNeko said. “If it weren’t for them watching it, we wouldn’t be this passionate.”

Fans should also check out Hellsing Ultimate Abridged, which they also told me about. The interview ended with Takahata101 asking me in Dende’s voice if he could pet my hair, but you should never expect an interview with Team Four Star to end in any normal way.