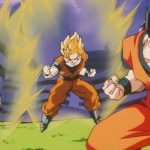 There’s been a lot of buzz going on already this weekend thanks to Jump Festa 2018, and the hype includes Akira Toriyama’s Dragon Ball franchise. Next year will mark the debut of the 20th theatrical anime film, which is officially penciled in for a December 2018 premiere.

A website is now live for the movie, which will have Toriyama writing and providing character designs. While details are light at the moment, the feature will reportedly offer up an origin that explains why Saiyan’s are the universe’s strongest warriors.

Note: Thumbnail is from Movie 13